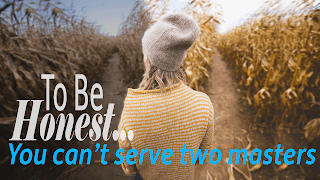 To Be Honest Wk 1: You Can’t Have Two Masters 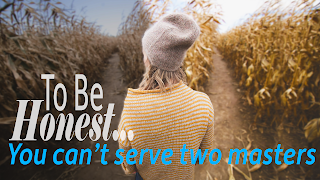 Sunday 25th Week in Ordinary Time: To Be Honest Wk 1: You Can’t Have Two Masters

Today’s message is about going deeper in your relationship with God, moving to a new level of thinking about who we are in relation to God and his Son Jesus. And this happens, in large part, by thinking differently about things like possessions and money.

We talk about how to handle our money because God is trying to tell us something. Sixteen of Jesus’ thirty-eight parables were concerned with how to handle money and possessions. In the Gospels, an amazing one out of ten verses (288 in all) deal directly with the subject of money. The Bible offers about 500 verses on prayer, less than 500 verses on faith but more than 2000 verses about money, wealth, and possessions.

To emphasize this, Jesus told a story about a property/money manager, called a steward, who squandered his boss’ property and money. So, the rich man tells the steward: “Prepare a full account of your stewardship because you can no longer be my steward.”

This is where the story gets interesting. The steward calls in the master’s debtors and reduces their debt. They pay the reduced amount in full. In each of these deals, the steward would have received a commission. He’s shaving off his commission, thereby reducing their debts and obviously winning their favor. He does this so that they may employ him once he is out of a job.

So, what? Well. . . we are God’s money managers. Everything we have in life is on loan to us from God. The money we have ultimately belongs to him. We have a little bit of time to manage a little bit, or a lot, of money. God’s money. That is Jesus’ point.

There was a time before you had the money you have now and there will be a time when you no longer have it. You might say, “My money is my money, I worked hard for it, I’ve earned it.” You might have worked hard for it; you probably do deserve it. The thing is, it’s not yours. And the unmistakable proof is, one day you won’t have it.

When John D. Rockefeller died, one of the richest men in the world, his accountant was asked, “How much did Mr. Rockefeller leave?” “All of it.” His account replied. It was no longer John Rockefeller’s money.

What Jesus is warning us against is that when we lose sight of the fact that we are stewards, and the money belongs to God, the money can so easily become our master. When we remember it belongs to God and that he is our master, then it takes the right place in our lives. To prove this point, the gospel writer, Luke, adds:

The Pharisees who loved money, heard all these things, and sneered at Jesus. They hated what Jesus had to say about money. How do you feel about what Jesus is saying about money?

You have a great opportunity to go deeper into your relationship with God, by recognizing and embracing your important role as God’s steward. Jesus says when we invest money in people and give to God by giving to his purposes we are investing in our true home, eternal life.

Money is a small matter in some ways. Compared to love and joy, peace and hope, friendship and family, and our church family, compared to a loving relationship with the living Lord, and eternal life… money is a small thing. All those other things are so much more important.

But how we use this small thing, in the short term of our lives, is a big deal long term with long term consequences. There are true riches, in eternal life, which are accrued by giving to others, and giving to God’s purposes. And we need to be clear about that because we can’t have it both ways…

Sure, it’s possible for everyone to TRY and serve more than one master whether you are the pope, a family, or a single person just trying to make it in life. To be honest though, you can’t serve two masters. “You will either hate one and love the other or be devoted to one and despise the other.”

We have talked about three things today, not being devoted to money, not squandering the master’s money, and how to properly use money through generosity. For us to do that well we have to be intentional about it. I must:

It all comes down to a question of focus.

When focused on following Jesus instead of money you don’t have time for the comparison trap that makes you jealous of what other people have.

When focused on following Jesus instead of money you don’t have to feel guilty about money because Jesus leads us out of guilt.

When focused on following Jesus instead of money you don’t have to worry about money, because he teaches us that worry is useless, and prayer is powerful.

When focused on following Jesus instead of money, it makes it much easier to gather for meals with your entire family in your home. Try it. Have dinner with your family this week – no phones, no TV. Just prayer and conversation. Even if you live alone, try to spend some time with the Lord over your meal.