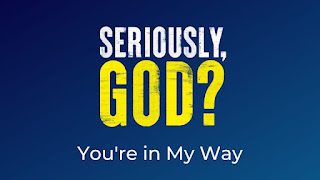 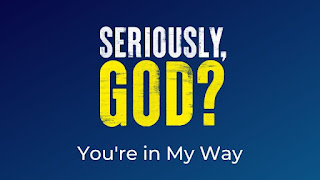 We are in the fourth week of our series for Lent called Seriously, God? Making Sense When Life Doesn’t Make Sense. In this series, we are examining obstacles that often keep people from taking God seriously or developing faith and trust in God.

Three weeks ago, we looked at how to make sense of life when God says no. Jesus shows us that God’s No’s help us live in true freedom—freedom from being enslaved to our own desires, evil lifestyle, and the opinions and whims of other people.

Last week we looked at why God seems to allow the wrong people to be in charge. Why does God allow corrupt people to gain power? We looked at what we could learn from the call of Moses. We learned that God sees his people suffering under corrupt leadership, and he wants to lead his people to a better place. We can cry out for God to lead us to a better place and seriously consider whether God wants us to step up to be a leader.

Today we are looking at times when God does not fix what we want fixed, and it does not seem fair. Maybe we even feel like God is getting in our way of life the way we think life should be. For example, there are irritations in life that come up again and again. You have a system’s problem at work, and you can’t seem to solve it. Or you have a personnel problem. You keep trying to find the right person but can’t ever seem to get it right.

You may have a relational problem that gets in the way of a happy family. You and your spouse would have a much better marriage, but your in-laws constantly get in the way, or there is one issue you keep returning to over and over again. You wish the problem would go away because it would make your marriage much better—or at least easier on you.

Your issue may be a health issue. You’ve been dealing with health issues, and if you weren’t sick, you could accomplish and enjoy more in life. And yet, no matter what you do, the issue won’t go away.

When those obstacles appear—or when God doesn’t seem to be doing what we want him to do— we can start grumbling. So did people in Jesus’ time. People who were nothing like Jesus liked him and drew close to him. The religious leaders didn’t like that, and they didn’t understand it. In their minds, God was for religious people, church people. Tax collectors and sinners didn’t belong in the club. Jesus seemed to meet with tax collectors and sinners just to annoy them. So they grumble and complain about his popularity.

Jesus addresses those religious leaders by telling the parable of the Prodigal Son which explores the heart of God the Father. In the same way the father welcomes the rebellious son home, God the Father will welcome anyone who returns to him.

The older brother, who has worked hard and kept all the father’s rules, is angry and jealous because the father throws a party in celebration of the sinning son’s return.

They felt like they kept all the rules. They considered themselves morally and religiously superior to everyone. They set themselves up as not only the ultimate religious rule keepers but also the ultimate judges of how well everyone else was keeping the rules. We can envision the older son getting jealous and angry, staying outside, and we can envision the father coming out and pleading with his older son to join them.

When the older brother becomes angry and refuses to enter his father’s house, that was an insult to the father made worse because it occurred in front of the father’s guests. He has to leave his guests and party to plead with the older son to come into the party. The son is embarrassing his father in a culture where honor and respect for your father were two of the highest values.

Then the humiliation and embarrassment increase. He said to his father in reply, “Look”—as in “Look you” or “Listen up buddy.” This is not how sons are to speak to fathers, then or now. Basically then he says, I’ve done everything for you , and you have done nothing for me.

While the younger brother rebelled to get money, the older brother obeyed to get the money. Neither cared about the relationship with the father or family.

And while both attitudes are equally wrong, they are not equally dangerous.

And the danger is a warning for us in our relationship with God.

It is far more dangerous to stay in the Church, seemingly in a relationship with God but not really, carefully obeying all the rules and checking all the boxes.

Like the older brother, you begin to think that God owes you for your religious rule-keeping. You fulfill your obligation and, because you do, you find yourself increasingly entitled to whatever it is you’re after: grace, favor, blessing, health, healing, heaven.

The older brother has been keeping accounts with his father for a long time. With the older brother, it’s not his wrongdoing but his self-righteousness that is keeping him out of his father’s house.

Now, having turned on his father, next, he turns on his brother:

He does not refer to his brother as my brother but calls him “your son,” distancing himself from his family members. He is driving a wedge between his brother and his father, trying to make his younger brother look as objectionable as possible.

Doubtless at this point, the guests inside the house have drifted outside, forming an audience to watch the angry exchange…. because, hey, who doesn’t enjoy watching the dysfunction of someone else’s family on display?

The older brother is creating disruption and division:

Some of you are thinking: “Well I hear what you’re saying but I still feel like the older brother has a point. It just doesn’t seem fair the father would throw this lavish party for his irresponsible son.

You are absolutely right. It’s not fair. And guess what? Don’t ever ask for fairness. You don’t want fair. The Gospel never pretends to be fair. It is more than fair. You and I are loved by God far more than we know, more than we deserve, more than we’ll ever earn. Whether we’re acting like the younger brother or the older brother, the Father extends grace and mercy to both sons.

It was the older brother’s responsibility to stop grumbling and complaining and share in the joy the father experienced at the return of his son.

Grumbling and complaining never leads us in God’s direction. The older brother’s mentality gets in the way of a fruitful relationship with God. It is never wise to get into a mindset where we think God owes us. It is God’s good pleasure to give you his kingdom. Like the father in the parable, when you turn to him, all that he has is yours.