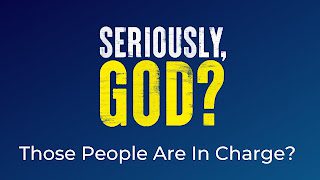 Seriously God? Wk 4: Those people are in charge? 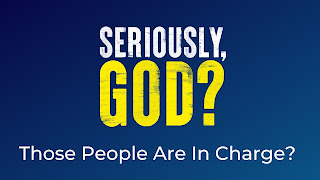 Week Four: Seriously, Those People are in Charge?
20 March 2022 – Third Sunday of Lent

We are in the fourth week of a new message series for Lent called Seriously, God? Making Sense When Life Doesn’t Make Sense. In this series, we are examining obstacles that often keep people from taking God seriously or developing faith and trust in God.

If we choose to lean into these problems, we may come to a greater appreciation for who God is and what he is doing in our lives. It sounds paradoxical, but a gap in our understanding of God can actually draw us closer to him.

No matter your political leanings, you probably have felt that recently. You wondered how God could allow that person to be elected President or Congressperson or Senator.

But it doesn’t have to be politics on such a large scale. You have probably seen it up close and personal. You may have wondered how God allows a teacher or principal to stay in their position of authority because it has hurt your kid’s school. They should have retired long ago since they make you and your kids’ life miserable.

Or maybe it is a coach or someone who runs the rec league. The coach’s kid gets all the playing time while your child rides the bench. Or maybe it is someone in your homeowners’ association. They are drunk with power. And you wish they would move on.

It could be a problem with work. Your boss doesn’t listen to anyone. Or you have seen how your company’s senior leadership is arrogant and driving all the good people away. And you wonder when it is going to catch up with them?

And then there is the Church. Of all places, we would think God would make sure there were good leaders there. How does God allow people who abuse their authority to stay in power in the church? We look around and see poor church leaders and wonder why God doesn’t do something. And this isn’t a new problem.

Maybe you’ve been hurt by a priest or the church. I’m sure everyone in here has a story of feeling mistreated or disappointed by a priest.

During Napoleon’s reign, he told the pope that he would destroy his church. The pope responded, “If 1800 years of clergy haven’t done it, then how can you hope to succeed?”

God’s people dealing with the wrong leaders is a theme repeated throughout the Bible. We see leaders who work against God’s purposes and bring pain into people’s lives throughout Scripture.

We see that clearly in many different passages of scripture, but especially in the one we read from Exodus and the story of Moses. In this passage we see the call of Moses and see God’s attitude when the wrong people are in charge.

The name Moses means “drawn from water.” The Egyptian Pharaoh became jealous of the Israelites who lived in Egypt. They had the best land, so he took the land and enslaved them. While the Israelites were enslaved, they continued to grow in numbers. The Pharaoh became nervous they would join their enemies and rebel. He ordered that all Israelite male children be thrown into the Nile immediately after birth and killed.

When Moses is born, his mother hides him for as long as possible. Eventually, she makes a basket for him and floats him down the Nile, where he is picked up by the daughter of the Pharaoh. Moses grows up in the home of the Pharaoh, knowing his people are oppressed and enslaved.

One day as a young man, he sees an Egyptian taskmaster beating another Hebrew, so he kills the Egyptian taskmaster. He is forced to run away. He marries, has a wife and children, and has the famous encounter with God that we read about this morning.

In the story, Moses would have been doing something he did every day. He tended sheep. However, on this day, something different happens. God gets his attention with a burning bush. The surprising thing is not that a bush is on fire in the desert, but that it is not consumed. One way God seeks our attention is by putting something out of the ordinary into our everyday life. If you see something different in your routine this week, it may mean that God wants you to stop and pay attention. That’s what Moses does.

So Moses decided to go over to look at this burning bush. As he came closer, God called out to him from the bush, “Moses! Moses!” He answered, “Here I am.”

When Moses turns aside from his life and checks out the bush, God speaks to him. To hear from God, we turn aside from our daily concerns and issues. We put aside what we are doing and pay attention to the signs around us of God’s presence and activity.

God said, “Come no nearer! Remove the sandals from your feet, for the place where you stand is holy ground. I am the God of your fathers,” he continued, “the God of Abraham, the God of Isaac, the God of Jacob.” Moses hid his face, for he was afraid to look at God.

God claims the place where they are standing to be holy ground because God is there. Notice it says that Moses hides his face. He is afraid to look at God. Later in his life, Moses will develop a close intimacy with God. He will talk to him as a friend. Often at the beginning of a faith journey, we fear God. We carry guilt or shame or just have distrust. If that is where you are with God right now or why you have stayed away from church, know that you can grow as Moses did.

So Moses hides from God, but God still speaks to him:

…the Lord said, “I have witnessed the affliction of my people in Egypt and have heard their cry of complaint against the slave drivers, so I know well what they are suffering. Therefore I have come down to rescue them from the hands of the Egyptians and lead them out of that land into a good and spacious land, a land flowing with milk and honey.”

These verses clear up some of our accusations we bring to God when the wrong people are in charge. Often we think God doesn’t notice the pain and affliction they are causing. God tells Moses he sees the pain caused by the Pharaoh and other Egyptian leaders. The Lord hears the cries and complaints against the slave drivers, and he knows their suffering; and God hears the cries of suffering people at the hands of bad rulers, bad bosses, and bad leaders.

Then he tells Moses he has a plan to rescue his people from the slavery of Egypt. God’s plan and will for his people is not Egyptian slavery but freedom. God’s will is not for his people to live confined in Egypt but in a good and spacious land.

As we have said, don’t confuse life not making sense with God not making sense. God’s will for the Israelites was very different from what they were experiencing. So he had a plan to lead them to a much better place. Do not mistake the pain and suffering of your current situation for God’s will. God wants to lead you to a better place.

For the next two chapters of Exodus, there is dialogue back and forth between God and Moses, in which Moses tells God that he is the wrong person, and God answers Moses’ concern.

Moses tells God, I am a nobody. God tells Moses he will be with him.

Moses tells God he doesn’t really know God well. God reveals himself and tells Moses that he will get to know him better by working with him.

Moses tells God no one will believe him and his mission. God gives Moses signs he can show others to prove he isn’t crazy.

Moses tells God that he just isn’t competent. God tells Moses he will give him the competence and send him the right people to lead.

Finally, Moses says, “I don’t want to do it,” and asks God to just send someone else. God gets angry at Moses, which motivates Moses. Moses finally does what God asks him to do.

The rest of the book of Exodus shows how God works with Moses and grows him into an incredible leader.

One, God does see lousy leadership. He is not ignoring it. If you are under bad leadership right now, one that is oppressive, God wants to lead you to a better place. He may be teaching you some other lessons of trust in the meantime, but God’s desire for you is not that you suffer under poor leadership. Cry out to God and share your frustration. God hears it.

Two, when you see the problems of bad leadership, God might be calling you to step up and lead. One of the reasons we have bad leadership is because good people don’t step up to lead. That is definitely not the only reason, but it is a factor. The wrong people rush forward who want to be large and in charge and tell others what to do, while good people, God’s people, have false humility.

Three, whatever leadership you have now, you need God to do well. Whether you lead a household, a classroom, a company, or coach a team, you need God to lead well. Be the leader others want to follow by humbly relying upon God.