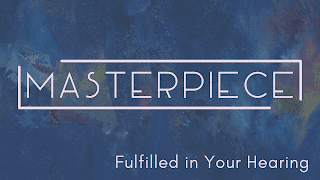 Masterpiece Week 4: Fulfilled in your hearing 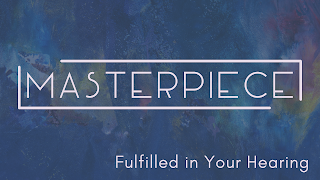 This is the fourth and final week of our message series Masterpiece. Over the last three weeks we have said that Jesus is God’s masterpiece. He is the self-portrait of God in the flesh and blood. He lived and walked the earth as fully human while being fully God. And he makes us sharers in the divine nature of God. By our baptism, God is making us into a masterpiece, as well, even though our lives are not perfect. And last week we discovered that like the water turned into wine, God wants to transform us by taking the ordinary and making it extraordinary. If you have missed any of the last three weeks homilies or if you would like to share any of them you can find them on our website saint mary dot life. There you will find them in written or audio form.

The Gospel for today is the account of Jesus at the Nazareth synagogue, right as he was starting his public ministry. As Jesus prepares to read one of the lessons, He unrolls the scroll of the prophet Isaiah, and then reads the passage.

Then he rolls the scroll back up, and he says to the congregation, “Today this Scripture has been fulfilled in your hearing.” This is what we call today a mic drop.

Fulfilled in your hearing! What did Jesus mean by that? And what relevance does this have for you and your life? Is it true for us, as it was for the people back then, that “Today This Scripture Is Fulfilled in Your Hearing”?

The passage Jesus quotes begins with describing the character in the passage: “The Spirit of the Lord is upon me, because he has anointed me.” So this is someone the Spirit has anointed. And in the context of the Old Testament, the identity of the speaker is clear. These are words that the Messiah would speak. This is a messianic prophecy. The Hebrew term “Messiah,” or its Greek equivalent, “the Christ,” means “the Anointed One.” Think back to when the prophet Samuel anointed young David. He literally poured oil, fragrant olive oil, over David’s head. This was to mark David out as God’s choice for king. It was showing that the Lord’s blessing and favor and power were coming upon David to equip him for his office as king. David was the Lord’s anointed, in that sense.

The ideas became associated with the promised son of David, the great king and deliverer to come, which was the Messiah, the Christ, the Anointed One. And so when Isaiah writes this prophecy several hundred years after David, it is clear that these are words the Messiah would speak. “The Spirit of the Lord is upon me, because he has anointed me.” So as Jesus read this in the temple, he is saying, I am that person.

Jesus is the Christ, the Messiah and as such the passage he read tells us he is sent to the poor, to the captives, to the blind, to those who are oppressed.

Which leads us to ask the question today, in our context: do you fit these categories? Who are the poor, captive, blind, oppressed? Can we admit and realize that this is speaking not only of other people, but of us?

The poor, the captives, the blind, those who are oppressed. That is us. That is you and me. By nature we are poor. We do not have any riches on which we can rely. Some of us do not have much money to start with, but even if you do, you can’t take it with you. Earthly treasures will do you no good after you leave this world.

Do you see yourself as a captive unable to free yourself? We are held captive in sin itself. Whether it is things as simple as being overly critical, unkind, not generous, or it is addiction to substances or the internet. We have a problem that we cannot fix no matter how hard we try or how nice of a person we are.

What does it mean for us to be blind if we still have our physical sight? Without the enlightenment of the Holy Spirit, you and I and all people are spiritually blind, groping around in the dark, not knowing who God is or how to reach him, always bumping into obstacles we ought to be able to avoid, running into one another, and straying off the path that leads to life. Searching to hear God’s voice, to know what he wants from us and how he is leading us.

We are oppressed by our sins and our inclination to sin. The world whispers its sweet nothings, its enticing messages, into our ears. Our own selfish desires can drown out the sound of God’s voice. This is the battle we are in.

So I’d say we need help. I know I do. How about you? Do you qualify as poor, as captive, as blind, as oppressed? Are you a sinner in need of help? Do you realize your need for a Messiah?

If so, I’ve got good news for you. You are the people for whom Jesus came! The Christ comes precisely to rescue you. Jesus is speaking to you today in our Gospel.

God’s grace comes to you and are proclaimed to you in the person of Jesus Christ. He is good news for the poor. In Christ, you have riches laid up for you in heaven beyond your wildest imagination, which no one can take away from you. Jesus Christ is liberty for the captives and the oppressed. He opens the prison doors and sets the captives free. He delivers you from the oppression of the devil, world, and ourselves, an oppression that would otherwise crush you. Jesus Christ is sight and healing for the blind. He shows you the way and says, “Follow me.” He himself is the way and the truth and the life. Christ shines the light of life on your path and leads you on it, all the way to heaven.

This is why he was sent. This is what he was anointed to do. This is why Jesus can take the scroll of Isaiah and read it and say, “Today this Scripture has been fulfilled in your hearing.” What a mic drop.

But how he fulfills it, ultimately, is what is so strange. You see, when Jesus reads this passage in the Nazareth synagogue, at first the people are impressed. They like what he has to say. But then their unbelief rises up, and they can’t believe their hometown boy Jesus, whom they’ve known since he was a kid–that he could possibly be the Christ. And they don’t like the fact that he hasn’t performed a big miracle in their town yet. And then Jesus tells them of some examples of miracles in the Old Testament which are for all people, not just them. This infuriates the crowd and because of what he has said they want to kill him. They do not receive him as their Messiah.

Ironically, it is in that rejection that Jesus will fulfill his mission as the Messiah. The fulfillment will take him to the cross. There the Messiah will die in shame for our sins and those of the whole world. This is how Messiah sets us free. His sacrifice on the cross takes away our sins and gives us the example and the power to make our sacrifice each day to God. It is through our relationship with God that we are forgiven and empowered to overcome. Christ is risen, and all who trust in him and are baptized with him–we will rise with Christ and become the masterpiece God created us to be.