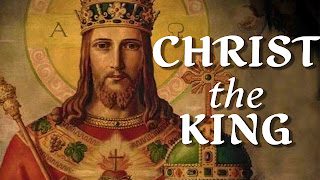 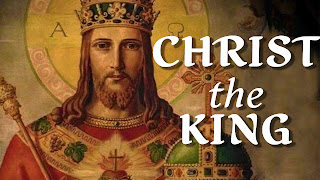 Today is the Solemnity of our Lord Jesus Christ, King of the Universe, and the last Sunday of Ordinary Time. Next Sunday, we begin Advent and a new liturgical year. Today we should be filled gratitude for the king who loves us and has mercy on us.

Recently the queen of England died and there was a lot of news coverage about it. There was also a lot of interest here in the US about her and her death. I think we are just curious about things that we don’t completely understand. She was a benevolent monarch. Some of you may have experience living under a king or queen but for most of us here in this country we don’t really get what a king is all about.

He’s kind of like a president but not really. He gets to make decisions that normally can’t be over ruled. Usually the king becomes king because his father or mother was the monarch before him, it’s hereditary. That’s how the current king of England came to be the king. He is Elizabeth’s son.

Sometimes the king is kindly and benevolent, as Elizabeth was, but not all are. Monarchies that still survive around the world have little to do with living like the people do. In our first reading today we hear of David being anointed as king. He was next after Saul, the king that the people wanted. The Lord gave them what they wanted, even though they needed no king but God. Saul was not a good king, but the people got what the clambered for. David was and still is for the Jewish people, the model of what an earthly king can be.

The gospels trace Jesus from the lineage of David the king. We easily speak of the kingdom of God but how much do we really think about what it means? We pray the Lord’s Prayer and say “thy kingdom come, thy will be done”. What do we think we are praying for?

So today we come to celebrate the kingship of Jesus and maybe we don’t completely understand that either. Why this term “kingdom”? The proclamation of the kingdom of God was fundamental to Jesus’ preaching. The people who heard him probably had a pretty good idea of what a kingdom was. They lived under Herod the king and the Emperor in Rome. But what they thought they were hearing Jesus proclaim was very different from what he meant.

They were hearing the Messiah, the new King who was going to over throw the Romans and bring back what they saw as the glory days of the Kings of Israel. Jesus wasn’t what they expected. His kingdom is his presence among us calling us to a new way of life as individuals and as a community. It is a kingdom of salvation from sin and a sharing in the divine life.

It is the Good News that results in love, justice, and mercy for the whole world. This king loves us more than we can even imagine and wants what will lead to our salvation from sin. A good king sets a safe and peaceful path for his subjects to follow. We have had the path laid out in front of us. God did not create us to be sinful and to die because of those sins. He created us to praise him and to know him intimately. To walk in the garden with him as Adam and Eve did.

The kingdom of God that Jesus proclaimed is the return of human beings to the relationship that we once had with God in paradise. If you’ve been away from the Church for a while and think that you have no place in the kingdom, just look to that example of the good thief that we have traditionally called Saint Dismas. If anyone ever had assurance that he was going to heaven it was him.

Jesus hanging on the cross with the title “King of the Jews” above his head promised paradise to him as he was dying on the cross next to the King. It’s never too late. Our redemption is the will of the Father and the reason that Jesus came. To bring us back to the kingdom and to raise up people to share in his own divine life. He does this by gathering us around his Son Jesus Christ and this gathering is the Church.

We gain admittance to the kingdom through our baptism and everyone is called to enter this kingdom. What we are celebrating today is not a concept, not some lofty philosophy but Jesus Christ who should rule our daily living, our values, our preferences, our choices.

Our secular society may be curious about what a king might be but has regrettably rejected the true King of the Universe. We should be grateful that he has called us to live in that kingdom and we have accepted the invitation. Having Jesus as our King, should fill us with gratitude by knowing how loved we are, but it also can give us courage and hope.

So after gratitude what part do we have in furthering the kingdom here on earth? In our recent homilies we’ve talked a lot about evangelizing, about sharing the faith. We can do that by simply being the Christian people we claim to be. We aren’t always aware of the good we might be doing. You’ve probably all had someone tell you how you did something that affected them in a positive way and you didn’t even remember the event.

We don’t always appreciate how significant our actions are for others or how much our presence means to them. That can be good and bad. Good because we don’t get thinking too much of ourselves and bad because we might quit doing it thinking it has no value. Our ordinary dealings with each other are in a real sense dealing with the Lord, and that’s especially true when we’re confronted with others in need.

We have people among us, probably right now, who are from someplace else. They don’t have to be refugees from war to need a friendly welcome. They might just be snow birds. This is a Sunday to let ourselves be comforted. We have a King and he is Jesus. And we should be filled with courage, hope, and especially gratitude for the king who loves us and has mercy on us.