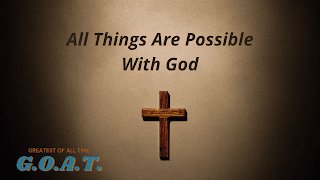 Greatest of All Time Week 4: All Things are possible with God 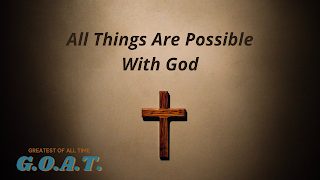 This is the final week of our message series called the Greatest of All Time. When we think about the greatest of all time or the GOAT it’s usually someone who is the best at what they do, and each week we have named people that we all know.

Sometimes the greatest of all doesn’t seem that way, especially at first.

He did, however, graduate from a university, but he struggled and nearly dropped out. In fact, he was in such dire straits that at the time of his father’s death, he was considered a major failure by him.

After graduating, he wandered, unsure of what to do with his life. After some time, he ended up taking a job as an insurance salesman, going door to door in an attempt to sell insurance. Eventually, 2 years later, he took a job at the Patent Office as an assistant examiner, evaluating patent applications for a variety of devices.

Of course, this is the same individual who brought us the theory of relativity, with groundbreaking work done in physics and mathematics, and helped us to reach deeper understandings about how the universe works, developing several fundamentals core laws governing physics, won the Nobel Prize in 1921 and created the beginnings of quantum theory.

We tend to have a fascination with telling, hearing, and being a part of great stories, especially stories of redemption. Movies have sequels because, if a story is good, people will go back a second, third, or however many times the story continues to be compelling. We may do things because we think it might make a good story, or we may find comfort when things go wrong because at least it’ll be a good story.

Among all the great stories, one of them is set apart. This story has unforgettable figures, dramatic storylines, interesting and unique places, heroic characters, and even flawed individuals. The story is filled with action, times of great joy, times of sadness and struggle, and times of gratitude. However, this story is different from the rest because each and every one of us has a unique place in the story. It is the Greatest Story of All time. It is the story of salvation.

God the Father created humanity out of love. However, humanity turned against God. Instead of choosing to keep humankind at a distance, God chose to reveal Himself and make covenants with individuals. Over and over people tried, yet failed, to remain faithful to God. So God became man and sent His Son, Jesus, to take upon humanity’s sin and suffering. Ultimately, Jesus gives His life on the cross so that humankind might have abundant life in Him, making Him the greatest of all time!

Moments like these can be found and related to in the Word of God. Someone before us has gone through a similar situation, God has spoken to him or her, and God continues to speak to us through His Word.

In our second reading today, the writer of Hebrews says, “…the word of God is living and effective, sharper than any two-edged sword…”

Through the covenants and prophets of the Old Testament, we get a foretaste of the new and everlasting covenant and the Son, who we encounter fully in the New Testament. When we read the story of Job, we don’t just see a man whose faith is being tried but also an example of how each one of us can remain faithful to God in the midst of our own trials. When we read the story of King David, and David makes mistakes and then repents, we can hear the voice of God’s mercy calling to us.

The Gospels paint a picture of who Jesus was — a man who healed those who were in pain, who comforted those who were suffering, and who taught His disciples what it meant to love the Father and follow Him. As St. John says at the end of his Gospel, we do not hear everything Jesus did “because the whole world could not contain the books that would be written” but rather we get a picture of who He was and what He did.

The Gospels also share how people reacted when they encountered Jesus and help us form our reaction to encountering Jesus.

The story does not end with the Death of Jesus on the cross; it continues with His triumphant Resurrection and then to His life within us, His followers.

“They took him [Jesus] down from the tree and laid him in a tomb. But, God raised him from the dead, and for many days he appeared to those who came up from Galilee to Jerusalem, who are now his witnesses to the people.” Acts 13:29-31

The Resurrection is the crowning truth of our faith because it points to the victory of Christ over sin. Furthermore, Jesus’ works and teachings are confirmed because the Resurrection gives definitive proof that Jesus has divine authority.

Jesus Christ is the key to reading the Word of God. Our lives make sense and we are able to see that the Resurrection and the many other stories are not simply moments in the past but realities in the present. -Hebrews 4:12

If we think we are hidden, how can God love us? How can His Word have an effect on our lives if we never read it? With God, all things are possible. All things!

If you want to grow spiritually; if you want to know who God is; if you want to hear what He is saying to you; then find a way to spend time in Scripture, if possible, every day. Start slowly, maybe five minutes per day. Here at Saint Mary we use an amazing Bible app that you can download and use to read the Bible. It also offers meditations each day. It’s quick and easy. Go to our website to find the link.

Begin to read scripture with your spouse, co-worker, or your children, and hear what God has to say to you in the Greatest Story of all time!