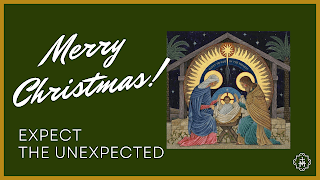 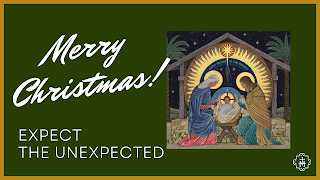 Advent-ually: Expect the Unexpected
The Nativity of the Lord (Christmas) Mass during the Night

What do you expect on Christmas Day?

For many years our family did the same things. On Christmas Eve night we would go over to my grandparents house on my mother’s side. We would exchange gifts, eat way too much country cooking (like fried chicken, butterbeans, and banana pudding.) Then, my dad and my uncle would build a big bonfire for my siblings and cousins. We would shoot fireworks until they ran out or it was time to go.

On Christmas Day, all of the kids would wake up early in the morning, even my brother who was normally a sleepy head. We expected gifts under the tree, so we’d rush to the Christmas tree to make sure they were there. Then persuade my mom and dad to get out of bed so that we could open our gifts.

That afternoon we would go over to my grandparents on my father’s side. More cousins, more aunts and uncles, more good and delicious food, more exchanging of gifts. On this side we had enough boy cousins that we would play football. In later years we would go over to my uncle’s house. What a great time it was. Nostalgic for me to think about it.

These were the things that I expected every Christmas, and I looked forward to it with excitement and anticipation.

What are you expecting this Christmas?

Special food? A lot of food? Perhaps you are someone who expects not too much in the way of food at Christmas. Presents? Particular types of presents from particular people.

Maybe you expect families to get together. Or perhaps you expect to be separated from your family. Maybe you look forward to Christmas Day being a day of rest. At Christmas we all expect something. Very few if anyone expect nothing at Christmas.

If I was to ask you to describe God in one page or to paint a picture that resembled him, what would it look like? Would it look like how God has been active throughout history?

The story of Christmas highlights that we should expect the unexpected from God. Even at church during Christmas we expect to hear a familiar story. I remember a children’s Christmas play in this movie, when one of the children in the Christmas play decided to show some initiative. Mary and Joseph had just approached the innkeeper for a room and he replied no. The child playing the innkeeper however wasn’t quite happy with the answer he was supposed to give and so continued… “Look we have no rooms left, but you can have mine, so long as you leave the donkey outside and tell my mom that you made the mess.” That young innkeeper surprised everyone at Christmas. And the story of Christmas is how God begins to surprise everyone.

Luke chapter 2 is one of the accounts of Jesus birth and in this account we see some things that highlight we should expect the unexpected. In Luke 2:1-6, we see that God chose an inconvenient place for Jesus to enter the world. Keep in mind Mary was pregnant.

Now gentlemen if you were God, do you think it would be a good idea to send a pregnant woman 70 miles walking or on the back of a donkey? Ladies, if you were pregnant would you like doing it? This is exactly what God did. Jesus wasn’t even born in His own town, where there would have been friends around. (house of bread, Bethlehem, born in a feeding trough)

And God can often do things that appear to us to be inconvenient. But often there is a good reason behind it.

In Luke 2:7, we discover that the place wasn’t even fancy, it was probably more than a little uncomfortable. It was out the back of the hotel, a stable. Not an ideal place for any child to be born. But for God he chose to enter the world by being born in a stable. Amongst the animals, if you have ever been to a show and taken your children through the animal enclosures you get a good idea what that would have smelt like. Being in a stable would have meant not much privacy. People could have come and gone from that stable as they needed to, especially the people who were working in that stable. That highlights something about God… He is accessible to all people. No matter who you are, God is accessible.

As we continue to read in the Gospel of Luke chapter 2, we see God chose an unusual group of people to be the first to see Jesus. Not only this they were responsible for sharing the fact that in Jesus God had come into this world. He chose shepherds, people who were not well respected, who society often shunned. Shepherds were people who often were out in the fields mixing with sheep for months on end, with no showers and plenty of sheep. They also had a reputation for being thieves. They were not liked by many people. However God chose them to go about the place and tell everyone that Jesus was born, and it must of had some effect because we are here, aren’t we?

And God continues to act in surprising ways. To understand this story even a little more it is helpful to understand the Jews at the time. Just over 2000 years ago there were a group of people in Jerusalem we call the Jews who were waiting for someone special to come. This group of people were followers of God. They had some indication that God would send a special person to come and be their leader.

And how did they know this? Because they listened and read some parts of the scriptures. Their bible consisted of what we now know as the Old Testament, the books from Genesis through to Malachi. These scriptures contained signs of not only who God would send but also how God acts. It showed God’s approach to life.

However the Jewish people’s expectations of God was limited. They expected God would operate according to their thinking. To how they perceived things. To their visions of a leader. However the Old Testament also indicated that God may surprise them. And so while the Old Testament clearly shows God promising a leader, it also hints that this leader although he comes for all people will not be accepted by all.

For instance in Isaiah 53, we hear the following, “He had no beauty or majesty to attract us to him, nothing in his appearance that we should desire him.” The Jewish people framed their ideas of who this leader would be based not entirely on the scriptures but on their own feelings of what God should be doing. They expected God to send them the type of Messiah who was interested and able to guarantee them worldly success, physically defeat their enemies and help them eventually bring in the reign and rule of God over the world. At the time the Jewish people were being controlled by foreigners, the Romans. They wanted them to be overthrown, and for some of the Jewish people they believed God would rule the whole world through Israel.

Do you ever do that with God?

Now we may not want to control everything, but often we only judge God on what He is doing for me, and is he making my life more comfortable. Maybe you have stopped coming to church, because God hasn’t delivered these things for you, you want. However this is why it is so important that we are continually engaging with God. That we constantly engage this bible, and participate as often as we can in worship services, in small groups, and other Christian activities. It is in these places we get a clearer picture of who God is and how He operates.

This year I encourage each one of you to engage God and listen to him. When we do we will often be pleasantly surprised. Our approach to life will be influenced by His. And we also receive many gifts from Him.

You see God had better and bigger ideas than the early Jews and He has a better and bigger ideas than us. God is not limited to any human thinking. God is not just focused on the short term, on the things that can disappear. God is concerned about your long term welfare, about whether you will be in heaven or not. God wants you to be with him forever.

Like the Jews of Jesus time we often are seeking to be saved from other people or things. From bad leaders, from poor governments, from increasing prices, from bad bosses or unfair tactics, and the list goes on. And God does help us when we face these difficult times however God is also doing something far more. The type of leader God sends to earth is one that helps each one of us individually experience a relationship with Him, where we experience his love, mercy, kindness and his grace.

He does this by not just telling us what we need to have a relationship with God, but by making it possible and even assuring it for us. And then He shows us what that relationship should look like by how he interacts with His heavenly Father. The God of this great big universe; the creator of all things; wants a relationship with you. Not just good people or church people. But you. Individually you. That is God’s gift of Christmas to you.

So when you look at baby Jesus remember he is a gift for you, that no one else can give. That at Christmas you get the best gift of all, eternal life with God.

Today on Christmas and throughout your life I encourage you to expect the unexpected from God. Allow His ways to surprise you.