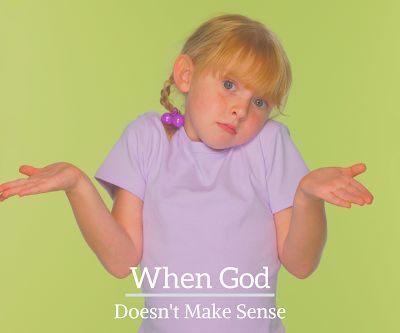 This is the second week of our Lenten series called “When God Doesn’t Make Sense.”

Sometimes things God says or does, or doesn’t say or do, don’t seem to make sense to us. Last week we laid out three principles to help us understand why God doesn’t always make sense to us.

However, God has given human beings freedom to act any way they want, including ways that are evil, contrary to what he wants. This is God’s permissive will. God permits people to have free will because only with free will can we truly learn to love. That is what he wants for us most of all, to learn to love.

The third introductory point is. We cannot know the mind of God, we cannot conceive the ways of God, but we can know the heart of God. Through Scripture God reveals his heart. And in prayer, in the Sacraments, in our giving and service, in a loving relationship with the living Lord, we can come to know God’s heart more intimately.

A lot of people, especially those who grew up Catholic, approach God as an intellectual or academic exercise. And when things don’t make sense in the equation, they reject the whole idea of God, the whole God thing.

But the relationship God wants with you by-passes all that. Don’t get me wrong. Your relationship with God is not anti-intellectual; faith isn’t opposed to reason. It is just that Faith doesn’t start there. Faith starts in the heart. God invites us to draw closer to his heart.

We are looking today at a passage from the Gospel of Matthew. It tells us after six days Jesus took the three apostles Peter, James and John up a high mountain, apart from others.

After six days? After six days of what? You see, six days earlier, Jesus asked the apostles an important question: He asked: “Who do people say that I am?” Peter responds: “You are the Christ, the Son of the living God.”

Jesus then promises to build his church on Peter’s faith which sounds great. Except from that time on, Jesus began to explain to his disciples that he must go to Jerusalem and suffer many things at the hands of the elders, chief priests, and teachers of the law, and that he must be killed.

So this trip up the mountain happens six days after that announcement and brings light to what happens next. Jesus was transfigured before Peter, James, and John. That is, His face shone like the sun. His garments became white as light. In other words, Jesus’ eternal divinity breaks through his humanity, just for a moment.

Right in front of Peter, James, and John appeared Moses and Elijah, talking with Jesus in all Jesus’ glory. The experience was so wonderful, so wonderful, such an incredible high, Peter wants to prolong it by building tents for them, so they can stay there, which is only natural.

But there is more than that going on. Six days ago Jesus told Peter that he was going to suffer and die. And so Peter is also trying to tempt Jesus away from that. Peter is thinking: “Let’s forget all about that suffering business, which I don’t understand anyway. Let’s stay here instead.”

As a matter of fact, Peter was still speaking when, a bright cloud overshadowed them, and a voice from the cloud said, This is my beloved Son; listen to him.

None of this makes any sense to the apostles. The Messiah isn’t supposed to suffer and die, they think. The Messiah, as they understood it, was supposed to rally the people of Israel, destroy the Roman oppressors, and establish Israel as an independent nation under God’s rule.

If Jesus was the Messiah, any talk of his suffering and death just didn’t make any sense to the apostles. The voice from the clouds did get their attention though. Because when the disciples heard it, they fell on their faces and were filled with awe. But Jesus came and touched them, saying “Rise and have no fear.” When they lifted their eyes, they saw no one but Jesus.

As they were coming down the mountain, Jesus tells the apostles to keep quiet about what they’ve experienced: the bright light, the cloud, the vision and the voice until the Son of Man is raised from the dead. And the apostles thought, “What? What are you talking about? This just gets stranger and stranger. Which often is our experience of suffering and death, we don’t understand it.

The apostles had not understood that Jesus had to die, and they couldn’t conceive of the idea of rising from the dead. They were following Jesus because he was popular with the crowds, and they thought one day he would be king. The apostles saw the idea of the cross as complete failure. Think about it, after Jesus was buried, none of the apostles waited around outside the tomb. They thought it was all over. They ran away. They ran away, depressed and frightened.

This event with Jesus, bright on the mountain, is called the transfiguration. It is meant to show us the connection between Christ’s humiliation on the cross and his transformation in the resurrection. This transfiguration of Jesus on the mountain foreshadows both Good Friday and Easter Sunday, to help these apostles begin to understand that the cross was Jesus’ greatest victory!, greatest victory, not over the Romans, but over suffering and death.

But then there are differences.

The transformation of Jesus’ human nature cannot happen apart from his Passion. He is exalted because he is willing to submit to the Father’s will, which includes suffering and death. However on the other side of his suffering and death is life! And what’s true for Jesus is true for us. There is no explanation for so much suffering and for the deaths of many people we know. But. . . what we do know, what our faith tells us and the cross assures us, is that suffering and death are not the last word.

Life wins! Because of the cross, life wins.

I heard the following story from a priest I know, Fr. Michael. Fr. Michael was visiting Rob, a sick friend who was about to die. Fr. Michael said: “The last time I saw Rob in the hospital, I came away sad, because he was in pain, and he was dying.

He said: “I can easily and honestly say, it was the most realistic, real dream, I’ve ever had. I touched Rob’s hand. I touched his face. I even said to myself in the dream “This isn’t a dream.” Rob just stood there in a doorway that was filled with light, the kind of dazzling light the gospel describes.”

Rob said “I going now” And I asked, “Why?”’ And he said, “Because my life is on the other side of that door.” And I asked Rob: “Are you sad to go?” He said, “I’ve been sad and afraid. But I’m not anymore. “Why?”“Because they showed me where I’m going to live.” He started to turn and walk through the door, but I asked him one more question: “Rob. . . who are ‘they’?” He turned back and smiled that beautiful smile of his and said, “The angels.”

Suffering? Death? Often it does not make sense to us. God tells us from the mountain: Listen to my Son about suffering and death. And God’s Son says: Life wins. Because of my cross, life wins. Jesus never promised us we would not suffer and die. What he promised us is for those who stay close to him, and embrace his cross, suffering and death are not the last word, life wins.