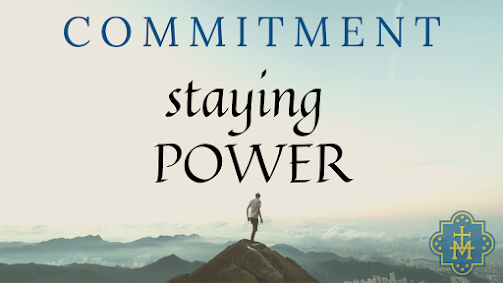 We begin a new series today that we are calling Staying Power. Let me give you the bottom line for today and really for the whole series. We grow spiritually by the commitments we make. This is a series about how to grow in your faith as a follower of Jesus Christ and the commitments we want to help you make in order to do that.

Last January I made a number of ambitious New Year resolutions with which I have had various levels of success. I did really well on this until late March, when… you guessed it, COVID-19! Looking back I tried to reflect on the excuses I made for not working out. But that’s all they were, excuses. I could’ve stuck with it, but I didn’t.

Commitments, and excuses for not keeping them, are all a part of life and the tension between the two never completely goes away. Marriage, family, work life asks a lot of us. Church can fall into that category too…

Spiritual commitments should be a part of life as well. But you might be thinking, I’m already committed, in fact I’m over committed! Why would I want to add any more commitments?

And even further, why does spiritual growth matter anyway? I believe in God, I go to Church… well, most of the time. I pray, when I remember to, and I’m a good person. I mean, I try to live a good life.

Your most important objective in life should be to grow spiritually. It is more important than your job, your career, your relationships, your friendships, your marriage and your kids… BECAUSE it can assure your success with all those other areas of your life.

That’s why we should be open to and interested in spiritual growth. But… being open to growth is not enough. Anyone can be open to growth, but to actually grow you’ve got to make a commitment.

That’s why we’re calling this series Staying Power. Staying Power is absolutely necessary for spiritual growth because there are obstacles to growing spiritually. Everything else in the world feels more important, more urgent, more real than your spiritual life. Everything gets in the way of making any kind of spiritual commitment: your work, kids, sports, family obligations, TV, Twitter, Instagram, Tik Tok… well, you get it. And the rest of the world doesn’t really support, much less encourage, your spiritual growth.

We are encouraged to lose weight, to get in shape, to buy that new car, to finally take that vacation. Nobody is encouraging you to grow spiritually. Besides, it takes time, there is no microwaving your spiritual maturity. There are no shortcuts or silver bullets to becoming the person God created you to be, the best version of yourself. Spiritual maturity requires obedience.

Think about it. If you were going to run the Boston Marathon, you wouldn’t sign up the week before and try to run it. You make a commitment and prepare yourself for months possibly even years. It doesn’t just happen overnight. It’s a process.

We’re going to take some time to take a look at this. We are going to look at a passage from the Gospel of Matthew, a parable that Jesus uses to describe the kingdom of heaven, which is always a reference to Christ’s rule on earth and the blessings that flow from his reign.

In this case Jesus is speaking to the religious leaders who were opposing him. “The kingdom of heaven may be likened to a king who gave a wedding feast for his son.” Jesus says the kingdom of heaven is just like a big party! Just like a banquet given by a king. This is an analogy that Jesus used over and over again.

Often we don’t want to commit to spiritual exercises, because they seem boring or depressing. This was never how Jesus described life with God. Instead he chose to compare the spiritual life to a party.

When we talk about spiritual growth, it is about learning to identify and enjoy the good things God has in store for us right now, about developing the right character to recognize and receive God’s gifts.

In the parable, like in our own culture, weddings were a big deal, a very big deal, even longer and more elaborate than we experience today. People made them a priority, and were usually willing to travel and spend a lot of money to be a part of one when invited.

A wedding feast thrown by a king would obviously be a big deal, everyone would want to come. But that’s not what happened. We are told the King dispatched his servants to summon the invited guests to the feast but they refused to come. They simply ignored the invitation.

It’s important to recognize, in looking at parables, just how unlikely the scenarios are that they describe. They’re so unlikely, that those listening to them would have thought it was ridiculous.

So, the king refuses to take “no” for an answer: A second time he sent other servants, saying, ‘Tell those invited: ‘Behold I have prepared my banquet, my calves and fattened cattle are killed, and everything is ready; come to the feast!

I mean we’re talking surf-and-turf, a pasta bar, sushi stations, top shelf liquor, an amazing location, all A-list guest list. The party of the season! You don’t want to miss it.

But… some ignored the invitation and went away, one to his farm, another to his business. The rest laid hold of his servants, mistreated and killed him.

This is an absurd story, of course, but it is an allegory, a story in which all the characters and details represent something else, something in real life. In this case Jesus is summing up the history of Israel and how they had historically ignored God’s invitation and mistreated God’s prophets.

So, the King, undeterred with this ingratitude and hostility, perseveres in his desire to throw a great party for his son and fill this party with guests, says: ‘The feast is ready, but those who were invited were not worthy to come. Go out, therefore, into the main roads and invite to the feast whomever you find.”

“The servants went out into the streets and gathered all they found, bad and good alike, and the hall was filled with guests.” Those invited were not worthy to come because they ignored and rejected the invitation. They made themselves unworthy by their indifference, and hostility to the invitation.

In order to fill the feast, the servants go out and invite anyone they can find. They bring in both good and bad alike. Everyone is invited. The party is finally filled but then there’s a twist in the story.

When the king came to meet the guests he saw a man there who did not dress in a wedding garment. He said to him, “My friend, how is it that you came in here without a wedding garment?” The man gave no answer.

The twist is, not only would the King have provided the feast for his guests, he would have also provided wedding clothes. This was sometimes a custom, even among the elite. But it would have been necessary for the guests at this banquet since they were brought in directly from the streets.

Evidently, this one particular guest refused to put on the new garment. And so the parable ends sadly: Then the King said to his attendants, “Bind his hand and feet, and cast him into the darkness outside, where there will be wailing and grinding of teeth.”

So they throw him out. Was it only because he didn’t like the way he was dressed? No, because he refused to participate in the feast. He refused to commit to the party in the simplest way possible, by simply changing his clothes.

God invites us to be a part of his kingdom on earth, to be a part of what he is already doing. And he even offers us the grace we need to accept the invitation and grow spiritually.

Over the next few weeks we are going to look at the commitments we think are vital for spiritual growth. Those spiritual commitments are Practicing Prayer and Sacraments, Sharing your faith, Engaging in Small Groups, Service and Tithing.

These are commitments we want to help you to make and keep in order to grow as disciples of Jesus Christ, and we’re going to be talking more about each of these spiritual commitments over the course of this series.

Commit to this series. If you are not going to be here in person, make sure you join us online. Our live stream Mass is on FB and our YouTube channel. We’re all invited to the party. And you can come as you are. You’re just not supposed to stay that way.