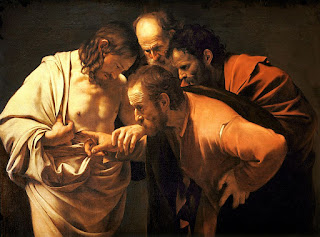 As we begin the second week of the Easter season, we are also in the second week of our Easter message series.  As a Church, we continue to celebrate Jesus’ resurrection throughout the month of April and into May. Easter is usually a happier time of year as Winter comes to an end and Spring begins.  Who doesn’t love the freshness of the season – the smell of cut grass, the sound of kids playing outside, the sight of flowers sprouting up and blooming.

This Easter, however, feels a bit different. We are living in a very uncertain time. With  COVID 19 still hanging over us, we do not know exactly how we are supposed to act. In that way it is very much like the experience of the first Easter season. The Apostles and the early followers of Jesus did not wake up on Easter morning filled with confidence and hope for the future. Instead they were filled with fear and doubt and uncertainty. Their world had been rocked by Jesus’ death on the cross. Their hopes and dreams for the future were sealed with Jesus in the tomb. So they were very unsettled and anxious much as we are today. They didn’t know what the future held.

But that mood changed through the course of that first Easter season. As they discovered the empty tomb and interacted with the risen Jesus, their mood and their perspective on life changed completely. As they came to faith in the risen Jesus, they renewed their sense of hope and confidence in the future.

In the Gospel for today, John, chapter 20  we read that the time is the evening, the first evening after Jesus rose.   Last week we read about John and his experience on Easter morning. Later that same night, John and the other disciples of Jesus were locked in a room. Much like us, they felt constrained. They had to stay inside. They couldn’t go outside because they feared the Jewish authorities, the same Jewish authorities who had days earlier arrested and killed Jesus. Everyone knew they were Jesus’ followers so they feared they would be next.

As they were huddled together in fear and confusion, Jesus appeared to them. Jesus comes to be present to them in the middle of their fear and he offers what all of us need when we are afraid. He says, “Peace.” Our peace rests in Jesus’ resurrection.  The disciples rejoiced when they saw the Lord.

They realized Jesus was not a ghost or a figment of their imagination. He was real. Throughout the resurrection testimonies, Jesus does very ordinary things – like eating and walking and talking – to show that he really did rise from the dead.  Another piece of evidence for the resurrection is that groups of people saw Jesus. One argument against Jesus’ resurrection is that the disciples were all dreaming or hallucinating that they saw Jesus. But dreams and hallucinations are individual experiences. I would never say to you, “We had a great dream last night.” Or “We had the strangest dream last night.”  A group of disciples saw Jesus not because they were hallucinating, but because he had indeed risen.

The apostle Thomas was absent. Rather than stay with the other disciples he was out on his own. While the other disciples wanted to hang together during this time of confusion and uncertainty, Thomas probably wanted to be alone and sort things out himself.  So he is not there to witness Jesus’ first appearance to the disciples as a group.

The others tell Thomas the great news that they have seen Jesus.  Not only was their evidence that Jesus was risen because the tomb was empty, now they have all actually seen Him!  And how does Thomas respond to this news?

He doesn’t believe them. Even though it isn’t just one person but a group of people that tell him.  Part of that doubt was his personality. Thomas was naturally a skeptic and a bit of a pessimist.

But most of his doubt probably came from the hurt in his heart. We often think of doubt as an intellectual issue, but often doubt flows from our disappointments and hurts.  On the day that Jesus died, Thomas had his heart broken. Thomas had put his hopes and dreams in Jesus. He believed Jesus to be a good man leading a good cause but had seen Jesus “lose”.  He concluded that Jesus was powerless over the evil Romans and the corrupt religious authorities. They had arrested Jesus and taken Him away. They beat him up and nailed him to the cross, the most brutal form of execution. Everyone knew that Jesus had lost.  What different conclusion was there?

The report of the resurrection gave reason to hope again. But Thomas had had his hopes dashed once, and he wasn’t about to get his hopes up again.  His refusing to believe was a way to protect his heart from hoping again only to have it dashed. He was using his head to protect his heart. It was easier to disbelieve than to believe in the resurrection, because believing would have been too painful.

Tough circumstances like the ones we are facing now often make us doubt God’s goodness or power. The classic argument…. If God is all good and all powerful, then he wouldn’t allow any suffering.  Since there is suffering, then God is either not all good or not all powerful.

Thomas thought that if God was all good and all powerful, then He would not have let Jesus die on the cross. He would not have allowed Thomas go through the pain of seeing his friend and rabbi executed. So Thomas is afraid to believe because he doesn’t want to get his hopes up again.

Now to Thomas’ credit he doesn’t say he will never believe. He says he will only believe if he sees the evidence for himself. He sets the bar pretty high. He needs to see the nail marks of Jesus’ hands and put his hand into Jesus’ side.

So a week goes by since the last time Jesus had appeared to the apostles. This would now be a week after Easter Sunday. Once again the group is inside, huddled and afraid. Eventually the early disciples became bold witnesses after seeing the resurrection, but it took some time and the coming of the Holy Spirit to move them out of their fear.  Once again to this group that is so afraid, Jesus offers peace.

Jesus comes to Thomas and offers him the evidence he wanted and asked for. In his love and mercy he doesn’t hold back from Thomas. He shows Thomas his hands and his side. Jesus invites him to see the wounds.  The wounds are proof that he is risen. They bear witness to his victory over death. Despite the beating and the crucifixion, He rose victoriously. The wounds bear witness to his great love for us.

Jesus invites Thomas to explore the evidence. He challenges him not to persist in his current state of refusing, but to believe in the resurrection…. to move towards belief.

Thomas answered and said to him, “My Lord and my God!”    John 20:28a
In meeting the resurrected Jesus, all of Thomas’ doubt and heartache melt away. He realizes that the crucified and risen Jesus is Lord. And Thomas personalizes it, “My Lord, My God.”.

When people come into the presence of God, their arguments and their reasoning for disbelief melt away.  Sometimes even our reasons FOR believing melt away. The presence of God, a deep personal relationship with Jesus, can be that powerful.  This does not mean it is not worth it to study and to apply reason. No, but those things are a means to an end to come to know God personally. The important end is to bring us into a relationship with God.  And when you have that, how you got there really doesn’t matter, it is like straw in comparison to the greatness and glory of God.

John says that he has written his whole Gospel so that others will come to the same belief as Thomas – that Jesus is the Christ, the Son of God. They will come believe and then come to have a better life.

The problem with the argument that if God was all good and all powerful then he wouldn’t allow suffering is far too narrow. That argument fails to see the whole story. It focuses on one part of life, and makes it the whole. Yes, in life we experience setbacks and suffering, but there is more to the story than those setbacks.  We need to see them in the context of the resurrection.

Jesus appeared to have lost when he went to the cross. The Romans and Jewish authorities thought they had won. But they were wrong. Three days later, Jesus rose from the grave. His suffering and pain were redeemed.  Not only that, it turned out to be his greatest victory over sin and death.

So what do we do with this?  First, I want to encourage you to lean into any doubts about God – explore the evidence, and seek to overcome doubts you may have about God. If you have questions or uncertainties about the resurrection, explore them. If you would like resources to help you, check out our website. On the bottom of our homepage, click on groups, we will post resources there. Also we are excited to be launching small groups all around this issue of doubt for the Easter Season. You can sign up on our website by going to our homepage and clicking on the groups tab.

Second, where have you had your hopes dashed during these recent weeks?  How have they impacted your faith and trust in God? Name them and be honest about them. If they feel particularly deep, maybe take 15 minutes this week to journal about them.

There is a scene from the movie, Apollo 13.  Remember it was the movie with Tom Hanks and was about a second mission to go to the moon. When it becomes apparent that the mission has to be aborted and the lives of the astronauts are in danger, someone calls the whole mission a disaster. Then Ed Harris, who played the head of mission control. speaks up and says, “No sir, I believe this will be our finest hour.”

Finest hours often come in the wake of sufferings and defeats. This is why you can continue to put your faith and hope in God no matter the setbacks, defeats and losses of this time. Your wounds and hurts will be redeemed at your resurrection.