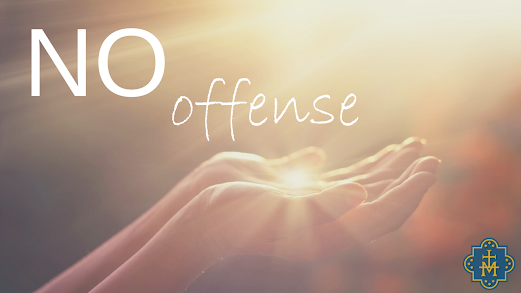 This is the fourth week of our Lenten series called No Offense.

Over the last three weeks we have talked about different ways we can be offended, but an offense we haven’t talked about is when we feel offended because we have been offended.

My entire life I have battled with my weight. As you might imagine, I have had lots of opportunities to be offended by people because of my weight. I’ve been called names and made fun of, left off of teams, not gotten the girl, and so on. You get a thick skin over time, but it doesn’t come without a lot of heartache.

I remember when I was in my 20’s, I had come home for the summer after I graduated college and before I left for my master’s. While home I applied for a job to make a few bucks. The job that I was hired for was working at a welding supply company. It was very physical work to move those big canisters around, especially if we had to load a truck with 200 of them.

My first day, they had me load a truck. I had never done this before so it was even more difficult. It took me almost 6 hours to load it. In general, it would normally take less than 2 hours to load. When I was finished that day, the man who hired me asked me to come to his office where he informed me that they had given me that tough task with the idea of running me off because I was overweight and they didn’t think I would do it.

They assumed, because of my weight, that I was lazy and not a hard worker. Nothing offends me more than when someone doubts my abilities because of my stature. The truth is that the prejudice that they had of me was unfair. They had made me do a job that was too tough for a new person, whether I was overweight or not. I was legitimately offended.

It is a whole different deal when we have a right to feel offended because someone has wronged us. How can we just let that go? And so we hold onto the offense because we don’t feel like we have any choice. If I let go, then somehow I am justifying the offensive behavior and denying my own feelings.

The truth of the matter is that you do have a choice. There is a way forward. There is another action you can take that is core to Christianity. Every week in the Creed we profess to believe in it. But it is so much easier to say it than to actually do it.

To help us out, we’re going to look briefly at St. Paul’s letter to the Ephesians. Ephesus was the fourth largest city in the Roman Empire and a center of commerce located in what is now Turkey.

Paul spent three years living in Ephesus, developing leaders and setting a firm foundation for the Church there. Subsequently he wrote to them underscoring basic principles of the Gospel. I encourage you to pick it up and read the whole book this week, it will take you about ½ an hour.

Paul writes: You were dead in your transgressions and sins in which you used to live when you followed the ways of the world.

It turns out sin doesn’t just hurt you. It can kill you. Sin is an experience of death. It kills the spirit and life of the soul. Sin kills relationships with others. Sin kills our relationship with God.

God’s laws cannot be broken. When we transgress God’s laws we don’t break his laws, we break ourselves. Paul continues to describe our situation: All of us lived gratifying the cravings of our sinful nature and following its desires and thoughts.

In other words, in doing whatever we want to do we’ve also lived unmindful of God and his word. Think of how you would feel if you were offered a job, and then because of the way you look, they made it tougher on you in hopes you would quit.

You would feel offended. You would be incredibly offended. And that might lead us to anger. And the anger might take the form of retaliation or punishment.

This is our reality before God. We have offended God. And God would be perfectly justified in responding to that offense with anger and wrath. In fact he has often been portrayed in just that way. But that is not what the Bible says. Paul tells us exactly what God does with offense, listen: But God who is rich in mercy, because of the great love he had for us, even when we were dead in our transgressions, brought us to life with Christ.

Paul wants us to be very clear that we have nothing to do with getting into a right relationship with God. It is all God’s work.

When it comes to “getting into heaven” or “being saved” however you want to refer to a right relationship with God, here’s how it doesn’t work: God doesn’t add up all the good things you did and how many times you came to church and then subtract all the bad things you did and all the Sundays you slept in instead and if the good outweighs the bad you’re in, and if the bad outweighs the good you get punished.

That’s not God, that’s Santa Claus. There are other faiths that believe that by undertaking good work we merit or earn our salvation and standing before God. But that’s not Christianity.

Certainly good work wins God’s favor and blessing and brings rewards. But it doesn’t bring salvation. Paul is clear: It is by grace you have been saved through faith, NOT by your works, so no one can boast, it is the gift of God.

Pay back for offenses is foolish and futile because it doesn’t really work. There might be some immediate gratification in it for us, but long term it hurts our hearts. The key to overcoming offense is to emulate God’s own pattern in dealing with us. God didn’t pay us back, he brought us back. We read from the Gospel of John today one of the best-known verses in Scripture so iconic because it sort of sums things up:

For God so loved the world that he gave his only Son so that everyone who believes in him might not perish but might have eternal life.

If we are to ever really get over offenses, there’s really only one way to do it: We need to forgive others as God has forgiven us.

Now the push back to offense is that if you forgive someone you’re saying what they did didn’t matter, or that it was OK. Of course it mattered. In the same way your offense mattered and so God had to do something about it.

Some people say I can’t forgive them because I can’t trust them. Those are two different things. Forgiveness has nothing to do with trust. You can forgive someone and still not trust them. Matter of fact we are commanded to forgive; however trust is to be earned by the other person.

Maybe you push back and say if I forgive then they’re going to get away with it. But is holding onto the offense really keeping them accountable? You’re the one still carrying the burden of the offense.

Forgiveness is not saying it didn’t matter, it isn’t about trust or necessarily about rebuilding a relationship. It’s not about holding someone accountable. Forgiveness is simply canceling a debt. That’s all it is.

At some point businesses have to write off money they’re never going to get and let it go. They decide that a customer that owes them money is never going to pay, and that it isn’t worth the energy and resources to keep chasing after it.

That’s forgiveness. We cancel debts because that is the way God chose to deal with us.

So how do you forgive someone a debt?

First, name the debt. What did they take from you or what do they owe you, a happier childhood, a better marriage, respect? Name whatever it is they took from you.

Second, you cancel the debt. The deeper the offense the more concrete you need to make this. You talk to an empty chair. You write a letter. You make up an invoice which you burn or rip up. This makes it real to you.

Third, forget the debt. When you hold onto an offense it takes up space in your heart. When you evict offense, invite the Lord into that place of your heart instead, to heal your heart, to bring you back to where you were before the offense.

You have every right in the world to be offended.