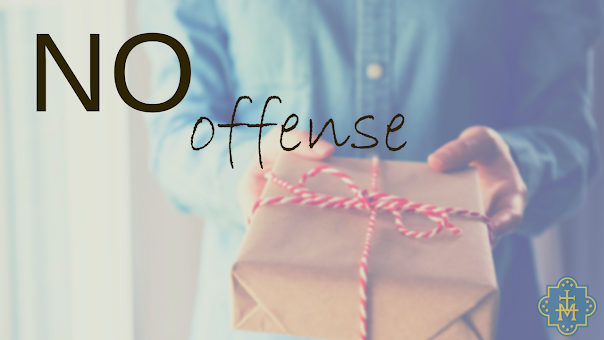 This is the third week of our Lenten series called No Offense.

I’m talking about being offended by the truth, especially as it comes to us in the form of feedback.

To be successful in life we’ve got to learn to receive the truth without being offended by it. If we can’t receive honest feedback, we greatly limit our development and growth.

We all know people around whom we feel like we are walking on eggshells because if you tell them the truth, they’ll react poorly to it.

We can see the dysfunction of another’s behavior, their impoverished or improper approach to some area of their life. But, we dare not share it because we know they’ll be offended by our observation.

You know people who love their kids but are “helicopter parents,” and you would like to challenge them. But you wouldn’t touch the topic with a ten foot pole.

You know people who are smart people but are doing some stupid things with their relationships or finances. But you would never say a single word about it.


You know people who are killing their careers or driving good people away from their organization because they overreact or micro-manage. But you’ve learned to look the other way.

It is simple to see these behaviors in others, and much harder to see in the mirror. The longer we ignore it for ourselves, the more difficult it becomes to see.

We need honest feedback to grow because we all have blind spots. You don’t know how your actions or responses are coming across to others.

You may have the best of intentions, but the impact of your actions or reactions might have the opposite effect.

And if you can’t receive honest feedback, you’ll never be able to adjust those actions and reactions to match your intentions.

If we never listen to the people around us, eventually we’ll be surrounded by people who have nothing to say. They’ll learn to keep their comments to themselves, and we will drift further from who we think we are and who we want to be. We will be ignorant of truths which would help us grow and be more successful.

There is a cruel irony to this. The very things you love, and care most about, are the areas you are sometimes least likely to seek or accept feedback.

If you want to be a great mom, then there is a greater chance that you’ll be offended by any weaknesses, or gaps in your parenting, or any concerns that might arise about your child.

If you take great pride in your work, you might easily bristle at any comments that don’t correspond to your own assessment.

It is ironic that we are most easily offended by the feedback we need most on what we value most.

We see this played out in today’s gospel. Pious and practicing Jewish people of that time would go to Jerusalem during Passover to celebrate Passover. The population in Jerusalem would swell as people from all over the surrounding area would come to the Temple to worship God and offer sacrifices.

The often dishonest profiteering of shyster temple merchants and money changers, cheated the people and who felt forced to fulfill religious obligations. These shysters operated in a part of the temple called the Porch of Solomon.

The Porch of Solomon was the only place the non-Jewish people were allowed to worship. But they couldn’t because of the cacophony there. This part of the temple should have served as a symbol to all nations that they were welcome in God’s house, that they are called to knowledge of the truth, but these crooked traders had turned it into a cacophonous circus.

So Jesus gives them some serious feedback: He made a whip out of cords and drove them all out of the temple area. He spilled the coins of the moneychangers and overturned their tables.

Worse than the shady merchants, were the religious leaders who were behind the whole scheme, making them wealthy men, their wealth coming at the hands of ordinary people of modest means.

In all of the bible, nothing angered Jesus except the hypocrisy of religious leaders, who, in turn, are extremely offended by Jesus’ anger. So they said to him, “What sign can you show us to prove your authority to do this?”

In other words, “Who the heck do you think you are?”

This is in an interesting response because the prophets had predicted the Messiah would one day come into the Temple and cleanse it of corruption. They knew what they were doing was not right and would one day come to an end. And still they push back. Jesus answered and said to them,

“Destroy this temple and in three days I will rebuild it.”

They have no idea what he’s talking about, thinking that he’s making the absurd claim that in just 3 days he could rebuild the temple which had taken 46 years to construct. He was, in fact, referring to his body and his resurrection; he will rise from the dead within three days of apparently being destroyed on the cross.

It turns out, when we are offended by the truth, there is a lot we will miss. So here are a few action steps to take.

Step One:
Think of feedback as a gift and not as punishment. Honest feedback is a gift that helps you to grow. It is your number one tool for personal and professional growth. Feedback is the breakfast of champions for successful people.

Separate the feedback from your identity. When we see feedback as a comment on who we are, instead of what we do, we’re not looking at it the right way.

Recognize you are a work in progress. You know you are not yet complete. You know you can still improve and grow. And feedback is simply giving you the information you need to do so.

When you are feeling most offended, when you’re most sensitive to feedback, that may be when you need it the most. It could be your greatest opportunity to grow. It is a gift, not a punishment.

Ask for more context. The reason feedback doesn’t always seem helpful is because it’s not always well presented. People will bring thoughts that are unformed or not well communicated. We have no control over how information is brought to us, but we can manage that information by asking questions and encouraging the other person to make their comments more helpful.

Step Three:
Give permission to someone or a few someones to give you honest feedback in a consistent way. When feedback comes from people we know and trust, it is easier not to be offended by it.

Ask a friend or family member, somebody in your small group who has a front row seat on your life to share their perspective, in a consistent way. The best way for you to receive honest feedback is by your personal invitation. And arrange with them to provide the feedback at a time, and in a setting, that is helpful.

There is power in inviting and receiving honest feedback, if we humble ourselves when it comes our way, we can identify the ways we need to grow. And more than that, there’s a spiritual power to it. That humility is an open door to the grace God will give us to overcome those unpleasant truths and become the people we want to be and God wants us to be.