Next Door III: Eating and Drinking 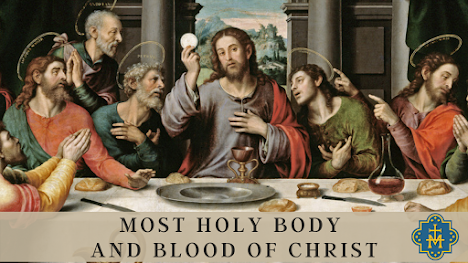 We are in the third week and final week of our series Next Door: The Art of Neighboring. The premise of this series has been that God wants you to be a source of his goodness and grace. If you missed any of the series and would like to listen or share them please go to our website saintmarydotlife.

Today is Corpus Christi Sunday when we celebrate and remember that Christ wants an intimate relationship with us, and the most powerful way he expresses that is by sharing a meal with us. To explain this a little bit more and what this has to do with making us a better neighbor, we are going to look at a passage from the Gospel of Mark just before Jesus’ death.

On the first day of the Feast of Unleavened Bread, when they sacrificed the Passover lamb, Jesus’ disciples said to him, “Where do you want us to go and prepare for you to eat the Passover?”

The Passover was one of many feasts that the Jewish people celebrated annually. Throughout the Old Testament God commanded his people to gather together to mark significant historic events of his goodness and grace.

And some of these celebrations, like our own, included eating and drinking.

Throughout the Gospels, Jesus himself observed the Passover and the other Jewish feasts. He also regularly spent time in fellowship with friends often over meals. Many of his most important teachings were delivered over meals. In fact, he spent so much time at dinner parties that the religious leaders unfairly accused him of being a glutton and a drunkard.

And these same leaders were not only astonished at how much time Jesus spent at meals but by who he dined with. They were outraged that he would eat with tax collectors and sinners. Because, of course, there is so much more to a meal than food. There is a spiritual and social dimension to it has well.

Jesus would eat with people who were far from God. And this was a source of scandal to the religious people. But Jesus cared more about reaching the irreligious than he did about religious rule keeping.

And, as a result, people who were nothing like him, liked him. One time he met a guy named Zacchaeus, who was the most despised man in town because of his dishonesty. Jesus invited himself to Zacchaeus’ house for dinner. After calling the corrupt tax collector Matthew to follow him, we find Jesus attending a party hosted for him by Matthew and his friends. Another time, Jesus hung out at the town well (the ancient equivalent of meeting at Starbucks) with a woman who had a very bad reputation. She became one of his fervent fans and followers and then brought her friends. This is a pattern seen over and over again in the gospel.

And so the disciples, who knew it would be important to him, asked about preparations for the Passover Jesus tells them:

Go into the city and a man will meet you. Follow him. Wherever he enters, say to the master of the house, the Teacher says, “Where is my guest room where I may eat the Passover with my disciples?” Then he will show you a large upper room furnished and ready. Make preparations for us there.

Jesus goes to a great deal of trouble to arrange this meal with the apostles because he knows it will be the last meal with them before he dies. The disciples then went off and entered the city and found it just as he had told them; and they prepared the Passover.

The Passover supper was governed by ancient traditions reaching back

to the story of the Exodus in which God freed the Israelites from slavery in Egypt. For the Israelites to escape Egypt, each household sacrificed and consumed a lamb.

So, according to tradition, to celebrate the Passover, you had to have a lamb. (Notice there’s no lamb mentioned in this story)
Mark continues:

While they were eating, he took bread, said the blessing, broke it, and gave it to them, and said,

He tells the apostles that the bread is his body, it doesn’t represent it, it’s not a symbol or sign of it, he’s not suggesting a metaphor for it…

“this is my body”

The Israelites escaped sin and slavery and received God’s grace and blessing by sacrificing and receiving the Passover lamb. Through his passion and death on the Cross Jesus becomes the Lamb who is sacrificed.

That’s why there is no lamb at their Passover dinner. Jesus is himself the lamb: The Lamb of God who takes away the sins of the world by asking the disciples to take the bread that is his body, he is inviting them to receive the sacrifice, as the Israelites received their Passover sacrifice.

We believe that the bread really becomes Jesus’ body, that at every Mass the bread changes substance, we call it transubstantiation, the bread becomes his body, the wine his blood.

Then he took a cup, gave thanks, and gave it to them, and they all drank from it. He said to them, “This is my blood of the covenant, which will be shed for many.”

All ancient covenants were sealed with blood. That’s the first reading, referring back to the Exodus Then Moses took the blood of the sacrifice and sprinkled it on the people saying

“This is the blood of the covenant, which will be shed for many.”

It sounds strange to us, but the blood was meant to show the seriousness of a bond. Like blood relatives, it is a bond that can’t be broken. A family bond. Jesus says that the new covenant will be sealed not with the blood of an animal sacrifice, but his own blood on the cross. And he says that his blood will be shed for many.

“This is the blood of the covenant, which will be shed for many.”

Many does not mean that Jesus only shed his blood for some people, or church people, or religious people. But for as many people, as many as are willing to receive his sacrifice. That even means the people in your neighborhood.

He wants them to be part of his family. As Christians, our challenge is to constantly look at people through this lens. As I said earlier, today is the Feast of Corpus Christi. The Church gives us this feast as a reminder that we do really receive Christ in the Eucharist. He not only wants an intimate relationship with us, He is really present. And, among the innumerable graces of this great gift the Eucharist is community forming.

With it, we are formed into a community, unified for a purpose. Like a family that shares the same blood, we as Christians share the same blood of Jesus. We receive Christ so that we become like him: to share the good news of God’s love in the world.

But where to start, how to begin? We can pray. We can pray for neighbors we know, and those we don’t. Last week, we laid out the challenge to get to know some of our neighbor’s names. And then, praying for them by name, and greeting them by name. But we can do more, too. Set a date on a calendar and a goal that by the end of this summer you are going to do something to show love of neighbors through food.

No kidding, through food. Maybe for you that means inviting a few people over for dinner you have not previously invited, or not invited in a long time.

Maybe you can host a barbecue and include not just people you know but people you’re just getting to know. Maybe it’s sending a dinner to someone who is facing some special challenges just now, or just baking a batch of cookies for them.

God uses a meal to build his Church to reconcile and renew the whole world. We can follow his lead and take this simple step too. And then trust God to use it in some way that maybe we can’t even see or ever know.

Jesus shared His Body and Blood with us so that we could share Him with others, our neighbors. Share His love.