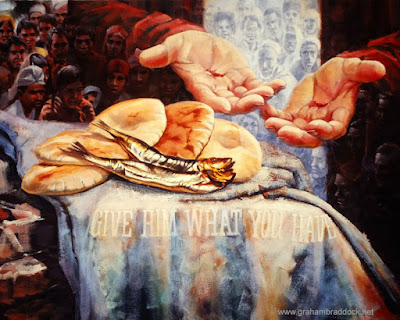 The Gospel passage we heard today comes from the sixth chapter of St. John’s Gospel. The sixth chapter of John is usually known as the “Bread of Life Discourse” because in it, Jesus speaks of Himself as the Bread of Life, given to us as real food and real drink. This week’s Gospel provides the beginning for Our Lord’s “Bread of Life Discourse” by recording his miraculous feeding of the five thousand. This miracle is so important that it is the only miracle of Jesus recorded in every Gospel, Matthew, Mark, Luke, and John. To help us ponder this miracle, I briefly offer six points for your consideration.

Number one: It was, in St. John’s words, a vast crowd. This reminds us of Mass where Jesus feeds us with his body because Mass is not a private devotion, or the privilege of a few. It is the celebration of the “vast crowd” throughout the world. The Eucharist makes the church from which the vast crowds today gather to be fed. The Eucharist, the Body of Christ makes the church. Without it we are simply another gathering of people.

Number two: St. John remarks that the Jewish feast of Passover was near. That was not so much a designation of the time of the year as it was an indication of the meaning of the Eucharist. The Eucharist is the Christian Passover.

Number 3: On the mountain slope, Jesus said, “Have the people recline,” which was the normal way of eating a meal in those days, and which foreshadows the Last Supper at which Jesus “reclined (at table) with the Twelve” (Mk. 14:18).

Number four: St. John goes on to observe that when it was time to feed the people, a lad came forward with five loaves of bread and a couple of fish and gave them to Jesus. It seemed like almost nothing compared to the need of so many people. In the same way at Mass, some of the people bring forward bread and wine to begin the preparation of the gifts. They are that lad of the Gospel and the gifts they present to the priest seem insignificant in comparison with what they will become, the Body and Blood of Christ. We say the same for your financial gifts. The Lord transforms your gifts and accomplishes rather miraculous work with your gifts, helping tens of thousands of people with your gifts, changing lives for the better with your gifts.

Number five: In the Gospel story about the loaves, Jesus performed Eucharistic actions. Jesus took the loaves of bread and gave thanks (the word “Eucharist” means just that: to give thanks). At this point St. Matthew in his gospel helps us with an important detail. He says that after Jesus had looked up to heaven and given thanks, he broke the bread and gave the loaves to his disciples who distributed the bread among the people. That looks exactly like what happens at Mass when the deacon and the special ministers of the Eucharist assist the priest.

Number six: What about the fish? Fish are not part of our Eucharistic meal, but a fish is an ancient, and still current, Christian symbol. The initial letters in Greek for “Jesus Christ, God’s Son, Savior” form an acronym, which spells out the Greek word for fish. (ICHTHYS)

For people alert to the meaning of symbols, any mention of a fish makes them remember that God loved us so much that he sent his only Son who became our Savior through the sacrificial offering of himself on the cross. During Mass, we exclaim to Christ: “We proclaim your death, O Lord, and profess your Resurrection.” The Mass is the living memorial of Christ’s sacrifice.

For the next four Sundays, we will be hearing parts of this sixth chapter of St. John’s Gospel, and with each Sunday, we will see more and more deeply into the meaning of the Most Holy Eucharist. Why do we spend so much time on this? It is because the Eucharist makes the church. That —-is why we are here, to become Church through the experience of the Eucharist and the physical reception of the Eucharist, Jesus’ Body, so that we can go out and be Church to the world.