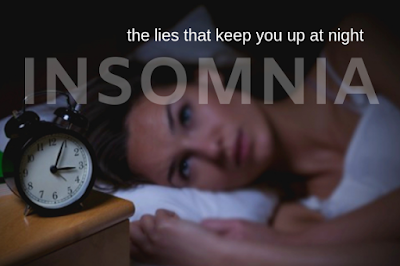 Today, we are starting a brand new homily series we’re calling Insomnia: the lies that keep us up at night.

Over the next few weeks we’re going to look at some of those doubts and fears that can linger in the back of our mind and cause sleepless nights.

We all have certain doubts and fears that don’t just go away when it’s time to go to bed. When the day settles down and there is no TV, no Internet or kids to distract you, and you are left alone with just your thoughts, they often drift into doubts and fears. And in the darkness, those doubts and fears grow.

The premise of this series is that behind these fears and doubts is a lie we buy.  And we could eliminate this whole exercise if we could replace that lie with a deeper truth.

The first one is the obvious one.  We fear rejection from other people. Someone else will tell us directly or indirectly: You’re not good enough.  You’re not smart enough. You’re not talented enough

And we have all felt that rejection, from the time we were in school, getting cut from a team, not making a part in the play, turned down for a date.

These early disappointments are bitter ones for sure, but it doesn’t hurt less later in life either, so much so, we fear the very possibility of it.  As human beings, we need approval, we long for approval, we yearn for approval. And when we don’t get it, or we’re afraid we’re not going to get it, it hurts.

Our second fear is rejection from God. We’re concerned we just don’t, or maybe we just can’t, measure up to God’s standards.

You don’t have to be super religious to realize that you’re not perfect. Which inevitably brings the lingering thought that God might reject us if we don’t measure up to his perfection.

Our third fear is rejection from ourselves.  We all have regrets where we haven’t measured up to our own standards. You are so driven, set such high standards for yourself that you struggle to live up to them. This is especially true for you high achievers, and I suspect we have a few of you here. Now, this fear of rejection, in whatever form, leads to constant comparison. If you find yourself constantly comparing yourself to others, that doesn’t make you a bad person, it just means you probably have a fear of rejection. That’s all the bad news.

The good news is that there is a clear antidote to this fear found in the Gospel passage today. There is a truth we can grasp that we need to work from our head into our heart

We are going to look at a passage from the Gospel of Luke. Jesus told this parable.

Two people went up into the temple area to pray; one was a Pharisee and the other was a tax collector.

When we hear the word Pharisee, we tend to automatically assume a negative view of the character, because they were the bad guys in the Gospel, always giving Jesus a hard time. For us the word Pharisaical conjures up images of hypocrisy.  But the people in Jesus’ day would not have heard it that way. The Pharisees were considered the most religious, the most righteous, people of all. Many considered them the models for how God wanted all people to live.

On the other hand, tax collectors were universally despised. That was because they collected taxes for the Romans, which most would consider an act of treason, besides which most of these collectors were mired in corruption, swindling communities of vast sums annually.

Jesus’ listeners would have naturally assumed that the Pharisee would be the hero of the story and the tax collector the villain, especially when they were going to the Temple to pray.

Jesus goes on with the parable ,

The Pharisee prayed saying,  “God, I thank you that I am not like other men, extortionists, unjust, adulterers or even like this tax collector. I fast twice a week, I give tithes of all that I get.”

To the crowd hearing this story, the Pharisee is objectively a good guy.  We should all aspire to be like him in his actions. He doesn’t cheat other people.  He is honest in his work. He’s loyal to his spouse. He fasts twice a week, he tithes.  All of this is good stuff. He is doing pretty well by any objective standards.

Then Jesus describes the tax collector’s prayer. “The tax collector, standing far off, would not even lift up his eyes to heaven, but beat his breast, saying, “God be merciful to me a sinner!”

While the Pharisee rattles on at length, the tax collector prays an entirely simple prayer: God be merciful to me a sinner!  He throws himself upon God’s mercy. acknowledging that on his own, he is not sufficient, that he deserves to be rejected by God.  His actions are not enough to endear him to God.

The whole crowd listening to the story would think, Be more like the Pharisee! Jesus, on the other hand, ends the story saying, the Tax Collector left the Temple good with God. The Pharisee’s prayer was not well received.

Measured by human achievement and performance, the Pharisee wins hands down. But to stop there is to live by the lie that we will never be enough. The truth is, we are not accepted by God based on our performance or achievements.  God accepts you not based on what you have done, but what he has done for you on the cross.

The tax collector went home in a right relationship with God because he sought acceptance based on God, rather than himself.  The Pharisee, who prays to himself, about himself went home full of himself, and really acted as if he had no need of God.

The point of the parable, and the answer for our fear of rejection, is that we don’t have to perform our way into a right relationship with God.  We simply need to receive his love and mercy with the humility to admit that we didn’t achieve it by our own efforts.

Consider this: Through the person of Jesus Christ, you are completely loved and accepted by God.  The one who reigns forever, the king of the universe, the author of all life, Jesus, calls you his friend.  And, if he accepts you and loves you, then there is no need to fear the rejection of others. And if God has accepted us, then we need to accept ourselves.