Insomnia: Do Not Fear! 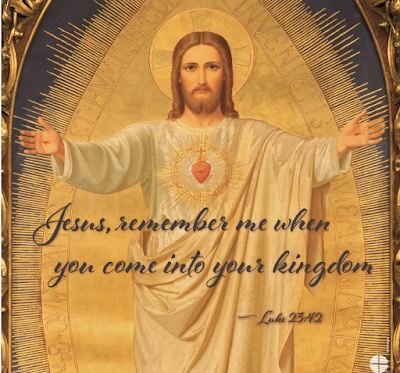 The last few weeks, we have been in a homily series looking at our fears.  We’ve looked at some of those fears that can linger in the back of our mind and cause anxiety and sleepless nights.  We all have certain fears that don’t go away just because it’s time to go to bed. For example, we fear rejection, we fear loss of stability, and we fear death.

Let’s take a look at today’s gospel and see how it speaks to us about these fears.

Today is the feast of Christ the King.  As part of this feast we read from Luke’s Gospel about the crucifixion of Jesus because there he is proclaimed king.  Throughout his life, the crowds wanted to make Jesus king, but he refused that title and would not allow it to be given to him.  It is only on the cross, where he lays down his life as his ultimate act of service, that he accepts, that he allows, himself to be called a king.

On the cross, the religious leaders make fun of him, they challenge him to come down if he really is the chosen one of God.  Ironically, if Jesus comes down from the cross, he cannot save them, or anyone. And so he ignores them. Then the soldiers also mock him.

Luke tells us, “Even the soldiers jeered at him. As they approached to offer him wine they called out, “If you are the King of the Jews, save yourself!’  Above him was an inscription that read, “This is the king of the Jews.” So Jesus’ own people mock him, and then the soldiers mock him, and then even one of the other two criminals, who were crucified next to him, mocked him.

As they hang on their crosses at either side of Jesus, with the last minutes of their lives ticking away, one of the crucified criminals clings to the habit of a lifetime and angrily lashes out at Jesus, as if Jesus were to blame: “It’s your fault we’re stuck here. Why don’t you do something, Jesus?” And he dies in his angry spiritual blindness.

The other thief breaks the habit of a lifetime.  He sees the sad truth about himself and speaks it.  And the truth sets him free to ask Jesus for the help that God had been waiting for so long to give him. He looks deep inside himself, admits he is a sinner,  and has the courage to ask: “Jesus remember me when you come into your kingdom.” So he hears the words, we all long to hear: “This day you will be with me in paradise.”

Both criminals were facing the same fate, both about to die for crimes they committed, but they have two very different responses to Jesus.  One joins the scoffers and mocks Jesus, while the other comes to Jesus defense, acknowledges his wrong doing and that he belongs on the cross. Typically he is called the Good Thief, and tradition tells us his name was Dismas.  The gospel of Luke calls him a criminal, a thief, not a slave or a rebel. The Romans didn’t usually crucify thieves. They would force them into slave labor, usually to row Roman warships. The fact that the Romans crucified him may have meant that he was too violent to control even for the brutal Romans, and so they put him to death.  We might say, there was not much good in the Good Thief. Nothing good except a little humility to acknowledge the helplessness of his situation and turn to Jesus.

And here this thief, Dismas, who was just a human being,  faces many of the fears we have discussed throughout this series.  He has lost all stability in his life. He is nearing and approaching his death.  He has been rejected by humanity to the point that he is not deemed worthy to live, and far worse is that he faces rejection from God for his many, many sins.  And now, nearing his death, Dismas says to Jesus, “Jesus, remember me when you come into your kingdom.”

Dismas recognizes he is about to die, and so he throws out this last ditch effort.  If entering Christ’s kingdom depended on his goodness, then Dismas didn’t have a chance.  His prayer was totally in vain, totally worthless if it depended on his goodness. All Dismas had to offer were the last few minutes of suffering before he died.  He couldn’t serve Jesus in any way, all he could do was ask for mercy.

And Jesus answered him, he answered him even though it meant more suffering for Jesus.  You see, every breath Jesus took from the cross brought excruciating pain as he had to push and pull on his nail-pierced hands and feet just to take a breath.

Jesus suffers even more pain so he can say to this criminal, Dismas, “Today, you will be with me in Paradise.” Maybe you have heard all of this before, but slow down right now to truly take in what happened here.
A man whose whole life had been spent robbing from others, beating others and been a curse to others, at the last minute is told he gets to enter into God’s kingdom, the place of Paradise.

Maybe you don’t think that is fair.  Why should this guy, acknowledge he is a sinner, send up a simple prayer, and then be told that he will be in Paradise?  That’s not fair. You — are — right, it — is — not — fair. It is better than fair, it — is — grace. If fair means I get what I deserve, what I really deserve, then I don’t want fair.

Jesus is the king.  He is the king of grace.  He is the king of grace and the message of the cross is not that you have to try and be good enough on you’re your own power or merits to get into heaven or good enough to enter Paradise.  Everyone of us is like Dismas, on the cross. That is, from time to time, we — have — failed. We all fall short of our standards, much less God’s standards. And yet God — accepts — you.  This is the good news. The good news of God’s lavish grace.

The Good News God has entrusted us, as his church, to share with our community,

A lavish, life-changing, grace that extends through Jesus, to Dismas, the criminal on the cross, to that unchurched guy or gal in her or his family room.

It is ultimately the belief in God’s grace, God’s unmerited favor that allows us to overcome our fears.  Can you spread that news?

The message of grace is not just something for the next life, it is about this life too.  It’s about changed lives – one life at a time.

Do not be afraid.

Do what Dismas did.  Turn to Jesus throughout your life and you too will hear those words from the king of grace, the king of kings and Lord of Lords; “you will be with me in paradise.”