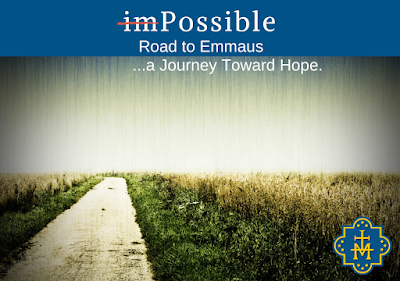 Welcome to the third week of our Easter message series titled Possible.

As a Church we continue to celebrate Jesus’ resurrection throughout April into May.

However, in the shadow of COVID-19 we do not know exactly how we are supposed to act or what to do? Maybe we have lost some hope. For the rest of this series our focus is on hope. Hope is faith directed to the future. How we feel about our future has a great impact on our present. Many people in our community feel stressed or disquieted, not because of what has happened to them but because of concern about what might happen. There is less confidence that goodness is coming our way.

Hope is the sunlight of the soul; without it, our inner world walks about in shadows. But like a sunrise in the heart, hope sheds light over our view of everything, casting all things in a new light. Hope is unique; hope looks forward. Hope reaches into the future as the confident expectation of goodness coming to us.

Maybe you are struggling to have confidence in the future. If so, I encourage you to think for a moment about goodness coming to you. What would that goodness look like? Put another way – what are you hoping for in the future? Maybe simply for your family to be ok. What does it look like for your family to be ok? For what should you really be hoping? It is a trickier question to answer than you might think.

To help us process it, we are going to look at an encounter between the risen Jesus and his first followers. In the gospel passage we heard, two of Jesus’ followers were leaving Jerusalem and walking to a town called Emmaus.

They were talking about Jesus’ triumphal entry into Jerusalem and then his suddenly being arrested, sentenced to death, and nailed to a cross. They are walking away from the other followers of Jesus because they believe there is nothing left for them there. They have to look for a positive future somewhere else. They had followed Jesus because they believed he would make their lives better, but his death meant the end of that belief.

This happens all the time. There is a lot of talking and discussing of a topic, but it’s like the blind leading the blind, no one can see where we are going. For example, in this Coronavirus situation we often hear conversations that go round and round but don’t bring us any clarity. Jesus asks these two what they are discussing.

Ever ask a question which stops people in their tracks? You ask an innocent question, and clearly you hit a nerve. That’s what happens here. The disciples were walking and that simple question made them stop, and the expression on their faces changed completely. They are downcast, dejected, sad, and without hope.

One of the disciples is Cleopas. He responds, “Where have you been? Don’t you know what just happened?” It would be like someone asking you today: What is Covid 19? Everyone is talking about COVID-19. How could you not know about it? In the same way, everyone in Jerusalem was talking about Jesus and what happened to him.

Jesus plays dumb so that they will share what is on their hearts. He gives them an opportunity to express themselves to him, and so he asks what sort of things have happened?

Cleopas says they were talking about Jesus of Nazareth. He describes him as mighty in both word and deed. Maybe you have never thought about Jesus in that way. Often the pictures of Jesus in religious pop culture make him look soft and weak. He is gently carrying a lamb or softly speaking with someone. Those images don’t really capture the real impact of Jesus. Crowds of people followed him because he was mighty and powerful in word and deed. Some passages say that Jesus worked such mighty deeds the people were both amazed and afraid in that instant. Jesus spoke and acted with great power and great authority.

Cleopas had followed Jesus because Jesus was mighty and powerful. But Cleopas and his companion are now sad, totally dejected, because they had lost all hope. Not only have things gone badly, but the months they spent with Jesus now seem a waste of time. They could have been looking for a better life somewhere else. Their hopes are dead and buried.

Let’s examine hope. There are three degrees of hope.

The first degree is casual hope. I hope it doesn’t rain tonight. I hope my grass comes in full this Spring. I hope dinner turns out right. I hope the baseball season starts soon. I hope we can still go on vacation this summer. Casual hopes are good things we desire that bring pleasure and satisfaction into our lives. When we lose out on casual hopes we suffer some disappointment. We might be in a bad mood, but we move on and get over it relatively quickly.

Our precious hopes are far more valuable and deeper than our casual hopes. When those hopes are dashed, it can really break our heart. It takes more time to recover from major setbacks to our precious hopes or when we realize a precious hope will not be realized. But the loss of those precious hopes still does not absolutely devastate us. Feeling devastated goes with losing an even deeper degree of hope.

When our hopes are in their proper places, attached to the right things, not only do we flourish more fully as human beings, but we are rescued from a thousand heartbreaks. The problem, of course, is that we confuse these different degrees of hope. We turn casual hopes into precious hopes and make precious hope our ultimate hope.

This is what Cleopas and the other disciple had done. They were hoping that Israel would be redeemed. Israel was supposed to be a light to all nations, but instead were just part of the Roman Empire. God had promised that the whole world would be blessed through the nation of Israel, but instead they had become so insular, self-centered, and weak they couldn’t bless anyone. So many of the Israelites hoped that God would redeem them by sending a Messiah who would overthrow the power of the Roman Empire. It was a precious hope they mistook for their ultimate hope.

Their hopes were out of order and misguided. What they thought had dashed their hope – the death of Jesus – was actually necessary for their hope to be fulfilled. They hoped and thought of redemption as over-throwing the Romans. They were hoping for something that was much smaller than God’s plans. In order to redeem Israel, the Messiah had to suffer and die and enter his glory. Now that the Messiah suffered, died and rose again, now that he has entered into his glory, Israel would become a light to the nations. The whole world would be blessed by Israel through the death and resurrection of Jesus.

So they had been hoping all wrong. Their hoping had to be adjusted. They needed to make God and his real promises their ultimate hope – not something so much smaller.

Then Jesus pretends like he is going on his own way, but the two disciples ask Jesus to stay with them. Remember, they still believe they are offering hospitality to a stranger. Things get really interesting because, now freed from their focus on themselves, the two begin to listen to the stranger, to turn outward, and then invite him to dine with them. Cleopas and his friend move from their own sadness to a willingness to care for someone else. And it prepares them to recognize God’s presence.

At their dinner table, in the blessing and breaking of the bread, their eyes are completely opened and they recognize Jesus. The Son of God has been traveling with them all along.

When Jesus had spoken to them about the Scriptures and put the story of what God was doing in a larger context, hope was being restored in them. So much so that they ran back to Jerusalem, which they had just, left to tell others what they had experienced.

Here is what we want you to know: Maybe this crisis, that you think dashed your hopes, is a way in which God wants to raise up something far greater and far bigger than you can imagine.

Here is what we would like for you to do: Ask yourself: For what am I hoping? Make a list of what you are hoping for on the other end of this crisis. List as many things as you can think of. Don’t be shy. Make a list of 10 or 50 or 100 things. Then rank your hopes into the 3 types we discussed, casual hope, precious hope, ultimate hope. We have created a discussion guide to help you with this which is called Message Matters. You can find Message Matters on our website home page, the message link.

Then bring your list to God in prayer. Ask God: what do you want to do with these things I am hoping for? How do they fit into your larger story? Maybe this crisis that you think has dashed your hopes is a way in which God wants to raise up something far greater, and far bigger, than you can imagine.