Greatest of All Time Week 1: Who is the greatest? 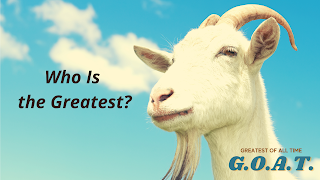 Today we begin a new message series called G.O.A.T.
That’s G-O-A-T or in common usage: Greatest of All Time.

It’s an acronym and phrase that is used quite a bit these days, usually in reference to a person who is the best at their particular job, sport, field or area of influence. Some examples from the past year are:

Tom Brady, the best quarterback ever; Nick Saban, the best college coach ever; Simone Biles, the best Olympic gymnast ever; and you can probably think of others.

It might be hyperbole to call these, or anyone else put forward, the GOAT, the greatest of all time, but it tells us something about how the world measures greatness, doesn’t it? You don’t usually see pictures of the building custodian or the school lunch lady with the caption “GOAT”. But titans of enterprise, CEOs, big time entertainers, and athletes—people who have accomplished great things in their lives, when they walk into the room, they instantly have our admiration, don’t they? Everyone wants to be great like them. But is that kind of greatness, the kind that is truly important—truly great?

As Jesus and the disciples passed through Galilee, they could have paraded through all the various towns and gotten all kinds of praise and attention from the crowds that would have shown up to welcome them, but that’s not what Jesus wanted. He didn’t want anyone to know they were passing through Galilee.

Instead, Jesus wanted to teach. He wanted His disciples to know about the kind of greatness He would put on display when He got to Jerusalem, how He would be betrayed into the hands of men and be killed, and then after His death, He would rise the third day. It would be the greatest of all time—nothing else can compare! He would willingly allow Himself to be betrayed and put to death! And then He would come back to life! And in that feat of dying and rising, Jesus would deliver a whole world of sinners from eternal death in hell!

But the disciples just didn’t understand. Instead of listening carefully and asking Jesus to explain, they went on in willful ignorance, afraid to ask Him what He meant. What Jesus was saying about being betrayed and killed was simply beyond their imagination. It was a lot more fun and distracting to argue amongst themselves over which one of them was the greatest.

With Christ in our lives and hearts, we are in the presence of divine greatness every day. And yet how often do we play that ignorance card ourselves when it comes to God’s definition of greatness? How often do we pretend not to know the will of God for the sake of telling ourselves that we’re already great, that we don’t need any help? We have this messed up, sinful, self-centered idea of greatness, that greatness is all about what other people—or even God—does for me. The world says, put you first, you’re number one, after all, you are worth it.

And yet Christ defines true greatness here in Himself. He displayed the greatness of His patient love again and again as He kept teaching His disciples the truth about Himself all the way down to Capernaum. He didn’t blow up at them when they didn’t understand—or didn’t want to understand. He didn’t call them to the carpet with fire and brimstone in front of the whole city for arguing over who was greater. He quietly, privately called them to repent with a simple question. Their silence spoke volumes about their guilt. But Jesus’ words spoke even more about His love and forgiveness.

Jesus’ true greatness is found in the patient love that He shows to each of us. In His willingness to teach us the same lesson again and again, no matter how ignorant we might be. Instead of condemning us, Jesus quietly in the small voice of His Word calls us to repent and confess our sins. He brings us around to the truth—the truth of our sin, but also the truth of His grace. The truth Jesus made the greatest sacrifice of all time, humbling Himself to be “obedient to the point of death, even the death of the cross”. By that greatest sacrifice, Jesus has washed away the stain of our self-centeredness and you and I are forgiven, declared “great”—declared righteous in the sight of God!

Jesus sat down and laid it out for His disciples: “If anyone desires to be first, he shall be last of all and servant of all” (v. 35). True greatness is the same for Christ’s followers as it is for Christ. It’s the kind of love and humility that makes me “last of all”, that puts everyone else’s needs ahead of my own. It’s the kind of love and humility that desires to serve all people—not only the people I like or the people who can help me get ahead, but to serve even the least among us.

Jesus defines true greatness in us by burning in our minds the image of a little child, a young preschooler, wrapped in Jesus’ loving arms. Jesus said, “Anyone who receives one of these little ones in My name, receives Me”.

He said it for a reason. The world says, kids are a burden, not a blessing. The world says, “Don’t let kids get in the way of your greatness—your happiness.” But Jesus says: You want to be great? Serve a child. Welcome a child in His name.

That kind of greatness doesn’t look like much in the eyes of the world. But there are promises attached to this greatness. The promise that, “Whoever receives one of these little children in My name receives Me; and whoever receives Me, receives not Me but Him who sent Me”. Whenever Christ’s love prompts us to want to love and serve someone else, even a child, we’re not just serving that child, we’re serving Jesus. No matter how seemingly small and insignificant, no matter how tainted and flawed, Jesus calls our works of humble service “great”—because they are made great in Him. We have the greatness of being known by God and loved by Him even though we don’t deserve it at all.

Tom Brady may be great at winning Super Bowls, but the real Greatest of All Time is Jesus. The greatest love; the greatest humility; and the greatest glory—true greatness is His alone! And to think, He shares that greatness with us!