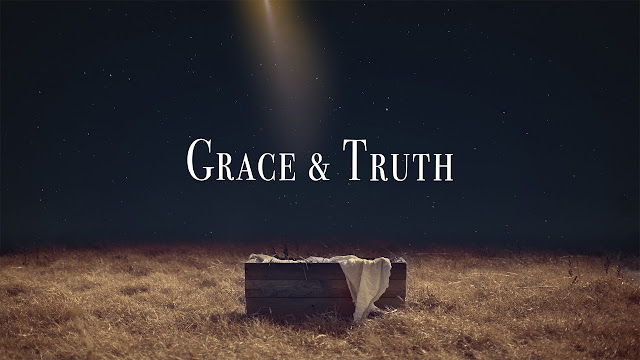 This is the first week of our new series for a new season. The new season is called Advent and the new series is called Grace and Truth. Advent means “to come.” We are preparing for Jesus’ coming, both his birth at Christmas and his second coming.

The phrase for our series, Grace and truth comes from the Gospel of John.

John tells the Christmas story from a theological or mystical point of view. He calls Jesus the Word, the Word of God. John describes the birth of Jesus, by saying: “And the Word became flesh and dwelt among us, full — of — grace — and — truth.” There is the phrase for our series, “full of grace and truth”

To know God’s character and values, we can simply look to the person and life of Jesus Christ who is full of grace and truth. Therefore, God is grace and God is truth.

Both grace and truth are consistently demonstrated by Jesus’ words and actions. It’s not half and half. Just like Jesus himself is not half God and half human, but both fully God and fully human. So Jesus brought the fullness of grace and truth into every encounter he had.

Grace — is — favor. Grace — is — God’s — help. Grace is God’s unmerited favor which means you can’t buy it, you don’t earn it, and you’ll never deserve it. All you can do with grace is refuse it, or receive it, and cooperate with it. Grace is a gift that helps us grow. Grace is not divine indifference to our faults and flaws but rather the means by which our flaws can be transformed. Grace isn’t about making excuses for our failures or lowering standards to accommodate our sin and selfishness. Jesus didn’t come to lower standards. In fact, he raised them. Grace is all about strengthening us to meet his higher standards.

At first glance, they may seem contradictory. But actually they’re related and interdependent. Truth asks, “Is it real? Does it correspond to reality?” Grace asks, “Does it help? Does it heal?” The truth often leads us to awareness of our selfishness, exposing our pridefulness, revealing the distance between who we are and who we want to be.

And as such, the truth is the first step toward grace, toward opening our hearts and minds to acknowledging our need for grace.

We are only open and willing to receive God’s grace when we acknowledge that we need it and we are hopeless without it. But the truth cannot really be received unless there is graciousness to it, unless it is meant to be helpful and done as a favor to others, as a genuine kindness. Otherwise, truth becomes a weapon. When someone says they are brutally honest, they are more brutal than honest.

Grace and truth are meant to naturally work together. It is a grace to deliver the truth to someone who is going the wrong way, who is messing up their life with destructive or self-defeating behavior.

We need grace and truth. Jesus gave it to us and modeled it for us. Time after time, Jesus brought the fullness of both grace and truth into his interactions with others.

It was Jesus’ ability to embody both grace and truth that shocked, surprised and confused people. It was also why people were attracted to him and followed him, because they sensed they needed both. And the two together are powerfully attractive.

One time the authorities brought him a woman caught in adultery. They wanted to condemn her for her transgression. They were without mercy. Jesus, instead, forgives her sin and pardons her unconditionally. That’s the grace part. But, he tells her: “Go and sin no more.” That’s the truth part.

Once a rich young man came to Jesus. He thought he had it all together, but in reality he loved his possessions more than God. When this man asked Jesus what he needed to do to be a Christ follower we are told: Jesus first of all “looked at him and loved him.” That’s the grace part. Then he challenged him to give away all his possessions and follow him as a disciple. That’s the truth part.

When the disciples found themselves at sea in the middle of a violent storm, scared for their lives, he quieted the storm. That’s the grace part. But he challenged them about their lack of faith. That’s the truth part.

We could go through the whole gospel…how Jesus brought grace and truth together, again and again in their full measure.

Not Grace or Truth, but Grace and Truth. That word “and” is vitally important. It is not one or the other, but both/and. Jesus is the fullness of grace and truth, both worked perfectly together in him.
All of us, on the other hand, tend to focus on one and ignore the other or emphasize one at the expense of the other.

For some people, everything is about the truth. They have to be uncompromisingly, brutally honest all of the time, but it is not helpful or in a way people can hear.

For others, everything is about grace and the qualities associated with grace. They will overlook offenses that shouldn’t be overlooked, turning a blind eye, or a deaf ear to what is unquestionably wrong.

All of us have a tendency to lean in one direction or the other from time to time. But, even more likely, we find ourselves bringing only grace to certain situations and only truth to others. So you may bring grace to your workplace, where you are perfectly charming, and then nag the very life out of your kids at home.

Maybe with your boss you’re the model employee, and a real team player. But with your direct reports, you’re heavy handed and hyper-critical.

Maybe you’re friendly to people at school, and then gossip about them behind their backs.

Take away grace or truth from any equation, and the results are

In the Gospel today, Jesus talks about his Second Coming. His coming at the end of time, that he promised would happen someday, though he did not tell us when.

Christmas celebrates Jesus’ coming in history, but the season of Advent, which starts this weekend, begins with looking at Jesus’ coming at the end of time. And Jesus warns us about his coming.

The example he uses is Noah, the ark, and the flood. Before the flood people were carrying on with their daily lives, as if everything was fine, while Noah built the ark. Noah was preparing for the future because he was in sync with God. He knew the larger picture that was about to unfold. And when it happened, he was prepared. The flood was coming, but only Noah was open to receiving God’s grace that allowed him to survive and thrive.

Jesus is telling the disciples to pay attention to the larger picture. They are to be constantly on the lookout to see God’s movement and activity in the world instead of being sucked in and consumed by the busyness of life. Jesus doesn’t want his disciples to be taken off guard. So he says to you.

Stay awake! You do not know on which day your Lord will come. That is a verse that perfectly sums up the whole season of Advent. Advent is about preparing ourselves for the coming of Christ both at Christmas, when grace and truth enter our world as Jesus, and at the unexpected time in our lives where we will stand before Jesus Christ.

This is what we want you to know: God’s grace and truth prepare us for the unexpected in life, including Christ’s coming. Christmas doesn’t mean anything if we don’t recognize we need truth and grace, and recognize it is available to us in Christ.