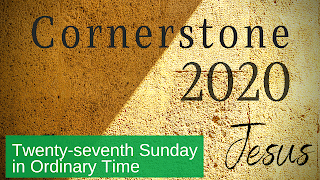 This is the fifth and final week of our series we are calling Cornerstone. We’ve taken these five weeks to look at the bedrocks of our faith and what brought our parish to the point where we find ourselves today.

We looked at grace which is God’s unmerited favor toward us. The Church is most appealing when we pay God’s grace forward, and that is what God wants us to do, to extend the same loving, caring, helping hand toward others that he extends to us.

We reflected on a Greek word “Ecclesia,” a word which Jesus himself used. We translate that word as church. But the church, the ecclesia, is not a building. Jesus used the word to mean the movement he was building. The church is a movement, a movement to transform ourselves and transform the world. We have to get out of our pews and off the couch if we are going to be part of Jesus’ movement to help change the world the way he wants us to.

Last week we looked at having a heart for the Lost. The Church is one of the few, if not the only organization, that exists for its non-members. We exist to reach out to the lost and introduce them to Jesus. You can find all of those messages on our website saintmary.life under the homilies tab.

These foundational principles are. . . well. . . , foundational. They are basic, and yet, we can easily lose sight of each and everyone of them.

Today, we are going to look at another unique word. Unfortunately it is ne of the last words, of which churches lose sight. It is strange, but churches do forget this word. It’s one word, a name. The word is Jesus.

To highlight this idea, look at the gospel passage from today. The story takes place after Jesus’ triumphant entry into Jerusalem on Palm Sunday. Jesus comes into Jerusalem, the home turf of the religious leaders and he comes in like a rock star, he had recently raised Lazarus from the dead. The people are ecstatic!

The crowds are cheering him as king, the Jewish leaders are enraged and jealous, and the Roman authorities are starting to get worried about insurrection and revolt.

The various political and religious factions of the day, that is, the Pharisees, the Sadducees, the Herodians, all hate Jesus because he has pretty much taken their playbook, for how to approach God, and thrown it out. That would be bad enough in itself. But to make matters worse, Jesus is successful.

He is successful, and they are not successful at all. They have made it so daunting and difficult to even try and live faithfully as a religious Jew, people have simply walked away and given up trying. It was so difficult even the leaders themselves could not do it. They actually withdraw themselves from many of the laws they tried to impose on everyone else.

So in the midst of this alarming and amazing scene what does Jesus do? He tells a story.

There was a landowner who planted a vineyard. He put a hedge around it, dug a wine press in it, and built a tower. Then he leased it to tenants and went on a journey. So this was something, in that time, a businessman or entrepreneur would do. He would determine that a property was suitable for some investment, like a vineyard, and he would oversee the hard work that lays the foundation for a return on his investment.

Then he rents the vineyard to farmers, who otherwise would be completely destitute. He rents it to them to tend the vineyard, and produce the fruit the owner is after.
When vintage time drew near, the landowner sent his servants to the tenants to obtain his fruit. But the tenants seized the servants. They beat one, another they killed and a third they stoned. Again the good owner sent even more servants, but the tennents treated them in the same way.

This is outrageous. The landowner seeks what already belongs to him, the fruit of the vineyard he planted and owns, but the servants withhold it. Then it gets worse. When the landowner sends his son, they say to one another, “This is the heir. Come, let us kill him and acquire his inheritance.” They seized him, threw him out of the vineyard, and they killed him.

They kill the son! This is an insane story.

We know in every parable Jesus told, the characters all represent someone.

Someone usually represents God, and in this parable that is the owner of the vineyard. That would mean that Jesus is the owner’s son (the son who is killed). The servants represent the prophets, who God sent to the leaders of Israel time and time again, but the leaders mistreated them. The terrible tenants? That would doubtless be, the religious leaders whom Jesus is telling the story to.

Jesus asks, “What will the owner of the vineyard do to those tenants when he comes?” With moral outrage and indignation at the very idea of this injustice and breach of the established social order, the religious leaders do not hesitate to answer. They say: The owner will put those wretched men to a wretched death and lease his vineyard to tenants who will give him the fruit.

So, Jesus says to them: Did you never read in the Scriptures: “The stone that the builders rejected has become the cornerstone; by the Lord has this been done, and it is wonderful in our eyes.”

So Jesus tells the leaders that the Messiah, their long awaited Savior, is to be rejected by them, and then become the cornerstone for the new movement God is building, which is the Church. He is establishing a new MOVEMENT that will produce the fruit that will be successful in a way they have not been.

We don’t need temples, but we have churches to promote the worship of Jesus. Jesus is the cornerstone of our faith. Think about how amazing it is that we are talking about a Jewish carpenter who lived 2,000 years ago. He never wrote a book, he never held a political office or made a lot of money. He never did any of the things that usually make someone famous or worth remembering.

People loved to be with Jesus and hang out with him. They liked to eat with him and talk with him. He was charismatic. They felt in him the presence of God’s love and joy and peace. He didn’t make a relationship with God seem so distant and far away.

While he was the holiest and most righteous person that ever lived, he didn’t hold people’s sins against them. He upheld both the importance of living morally and challenged others to do the same but not in a way that was demoralizing.

The purpose of his life, death and resurrection was to ransom you from sin, deliver you from the clutches of evil, restore you to God – so that HIS personality and HIS life could heal and fill YOUR personality, YOUR humanity, and YOUR life.

We exist to lead people into a growing, personal relationship with Jesus. Knowing Jesus is the single most important thing that can ever happen to anyone.

So as we conclude this series, I encourage not to forget the word, the name. Don’t forget the name of the cornerstone. Don’t forget Jesus. I invite you to pray this simple prayer: Jesus, I want to know you better.