Cornerstone Week 4: Heart for the Lost 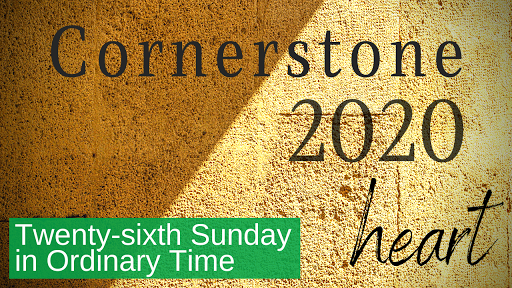 This is the fourth week of our current message series that we’re calling Cornerstone. We’re taking five weeks to look at the basics, the bedrocks of our faith and what has brought our parish to the point where we find ourselves today.

We’ve talked about the most basic principle and practice of all: to share.

We’ve also talked about the gift of grace and paying it forward. And the Church as the primary place where that happens. God’s chosen instrument of grace.

Last week, we looked at the word Ecclesia, a Greek word for Church, that means a gathering of people who meet to make a positive impact on the community.

As we continue our series today, we are looking at one of the most important core principles for our parish. It was core to what Jesus taught and yet, it is easily lost sight of.

To help our discussion today, we’re looking once again at the Gospel of Matthew. Jesus enters Jerusalem on Palm Sunday greeted by crowds of people …just days before they would condemn him. He then goes to the Temple and it’s quite a scene.

Pious Jews came to the Temple to offer sacrifice, as an expression of worship. Sacrifices, like pigeons and doves, were sold in the Temple Courts. So the whole place was more like a busy market than a House of Worship. And the commerce there was corrupt, profiting on the religious faith and fears of common people.

Jesus responds to this scene negatively – violently actually. He overturns the tables of money changers and those selling doves. He accuses them of making the Temple a den of thieves rather than a place of prayer. When the religious leaders see the disruption they question Jesus. By what authority are you doing these things? Who gave you this authority? Jesus, however, does not answer the question.

Instead, he proceeds to tell a parable. Jesus says to the chief priests and the elders: A man had two sons. He came to the first and said, “Son, go out and work in the vineyard today.” The son said in reply, “I will not,” but afterwards changed his mind and went.

Then Jesus says, “The man came to the other son and gave the same order. He said in reply, “Yes, sir,” but did not go.

So the same father goes to the other son and gives the same order to go work in the vineyard. He agrees, but does nothing.

Then Jesus asks the Pharisees a question, “Which of the two did his father’s will?” They answered, “The first.” It is a pretty obvious answer.

Then Jesus says something that was incredibly offensive to the chief priests and elders. Jesus said to them, “Amen, I say to you, tax collectors and prostitutes are entering the kingdom of God before you.” Then he adds why this is so: When John came to you in the way of righteousness, you did not believe him; but tax collectors and prostitutes did.

What’s this about? Well, you remember John the Baptist, he went ahead of Jesus preaching a message of repentance. It turns out the church people didn’t pay any attention to him, just as they would subsequently ignore the message of Jesus.

But, some very unlikely people did pay attention, people who were not at all church people, people who weren’t even believers. Jesus called them “lost” people, because they were lost when it came to knowing God in their lives.

Jesus made lost people a priority. And he went out of his way (way, way out of his way) to do it. He spent time where they spent time. He knew how to talk to them and what was important to them. He recognized their worries, fears, sorrows and sins. He understood their hearts, and he loved them by making an investment in them. Jesus found lost people and made them into his followers.

And here he is suggesting they’ll be entering the kingdom of God ahead of the religious leaders. How did that happen? Well, they changed their minds when they heard John the Baptist’s preaching. And when Jesus came they began changing their ways. This was his basic mission and message.

All his preaching and teaching, his miracles, his gathering and sending of the disciples, even his cross and resurrection, are part of this basic ministry that is called evangelization. For Jesus, evangelization was his commitment to bring the good news of God’s kingdom to everyone, starting with lost people.

And he asked us to do the same. The Church isn’t for church people. In fact the Church is one of the few organizations that exists for its non-members.

No one in that time would have thought the tax collectors, prostitutes and other sinners would have been interested in the message of the Gospel. That’s what the religious leaders assumed and they were wrong.

It was the people whose lifestyles were most at odds with the laws of God, who jumped at the opportunity to embrace Jesus’ message. Look at Matthew himself, whose Gospel we read today. He walked away from his life of legal thievery as a tax collector and became an apostle and an author of the Gospel.

There are people in your life who you would think would never be open to an invitation to church. And, you may be right. But, you may be wrong. Our commitment is to work to be a church that unchurched people will want to attend. If that describes you. If you don’t consider yourself a church person, a religious person, we’re glad you are here.

We want to be welcoming and accessible to outsiders so that eventually they become insiders. And that means as a church, we are going to challenge those of you who are insiders over and over again to help us create an environment that is accessible and inviting to outsiders.

We’re going to ask you topark in the back, so that when unchurched people give us a try, they have a parking spot. We’re going to challenge you to smile and sing and help shape a loving and joyful environment. We’re asking you to find the fellowship and friendship you need to meet these other challenges.