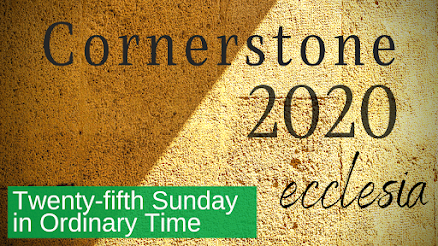 This is the third week of our message series that we’re calling Cornerstone. We’re taking five weeks to look at the basics, the bedrocks of our faith and what has brought our parish to the point where we find ourselves today.

We talked about one of the most basic principle and practice of all: share. We decided to be a church that people who don’t like church like. With a vision to be a place where it becomes impossible not to share Jesus with the world!

Last week we talked about the importance of grace. We all need grace. Grace is a gift. You can’t buy it, you can’t earn it and you can’t pay it back. You can only pay it forward. And the Church was established to be the primary place where that happens. God’s chosen instrument of Grace

Today we are looking at something you’ve probably never heard of before, but something foundational and fundamental to the life of the church. Again we’re looking at a parable of Jesus, these were stories he told with lessons to instruct his followers.

The kingdom of heaven is like a landowner who went out at dawn to hire laborers for his vineyard. When an owner of a vineyard has work that needs to be done, he goes to the marketplace where he finds day laborers. After agreeing with them for the usual daily wage, he sent them out into his vineyard.

The story continues: Going out again about nine o’clock, the landowner saw others standing idle in the marketplace, and said to them,“You too go into my vineyard, and I will give you what is just.” So they went off.” The owner goes out again at noon and three and does the same thing. And then he goes out again at the five o’clock hour, an hour before quitting time, and discovers still more idle people whom he invites to labor in his vineyard. Which doesn’t seem to make much sense at face value.

If you are wondering why this may have been the case, remember the Romans were occupying Jewish land. One of the key components of occupation was taxing the people. When the people could not pay they would lose everything, and specifically, their land. In an agrarian society, losing your land meant losing your means of making a living. So there were plenty of people with nothing to do available for hire.

Anyway, when it was evening the owner said to the foreman, “Summon the laborers and give them their pay, beginning with the last and ending with the first.” When those who had started about five o’clock came, each received the usual daily wage. So when the first came, they thought that they would receive more, but each of them also got the usual wage.

So the people who worked the whole of the day receive the same compensation as those who came at the end of the day. And on receiving it they grumbled against the landowner, saying, “These last ones worked only an hour, and you have made them equal to us, who bore the whole day’s burden and the heat.”

This seems like a very valid point. You would think they would get more; since they labored longer and accomplished more for the vineyard owner. This is not common practice, if we paid those who worked longer hours the same as those who worked less hours, everyone would start working less. But Jesus is talking about the kingdom of heaven. He is talking about God’s kingdom and God’s economy, not our economy. God’s economy is different from ours.

The other problem is they are looking at the situation from their perspective. They feel ill treated. But they’ve forgotten one simple fact, which the owner is quick to remind them about. The owner said to them in reply, “My friend, I am not cheating you. Did you not agree with me for the usual daily wage. Take what is yours and go.”

He held up his end of the bargain. He promised to pay them a days’ pay for a days’ work. He continues: “What if I wish to give the last one the same as you? Or am I not free to do as I wish with my own money? Are you envious because I am generous?”

They had forgotten one little fact: The money was his.

Like last week’s parable, this parable is about grace. Grace isn’t fair. And that’s only a problem when we don’t get what we think we deserve or want more than we got. We don’t complain when grace works in our favor. The five o’clock workers don’t complain that they got paid too much for so little work.

The parable teaches us of the graciousness and generosity of God, represented by the landowner. God gives lavishly. He invites all his followers to display the same generosity. The parable also teaches something else, God is looking for more and more people to work in his vineyard, to build his kingdom. The owner goes out at dawn, at noon, at 3 pm, and even in the last hour looking for people to work. God is gathering a growing movement of people who are about doing something, building something. And it’s never too late to get involved.

Earlier in Matthew’s Gospel, Jesus discloses this plan to the apostles. “On this rock I will build my church”.

He tells the apostles that he will build his Church. We often think of buildings when we hear the word Church. But Jesus never built a building. The word in Matthew’s gospel, was a very curious choice; in the original Greek the word was “Ecclesia.” It’s a word that doesn’t even appear in the Bible until Jesus uses it here. The apostles wouldn’t have even known what he was talking about.

What’s that? The kingdom of God is the place where God rules people’s heads and hearts. It is the place where they allow God to have control over their family, their finances, their future, their career, their recreation and, increasingly, over every and all areas of their lives. The movement is to lead people into a growing relationship with Christ.

The work of God’s kingdom is connecting people to that purpose. To be a part of the movement means to reorient our life around the person of Jesus Christ.

It is a movement to be Jesus’ witnesses not only where we live but to the ends of the earth. It has no room for people sitting idle and not getting to work. The opportunity we have is significant.

Think about it. The Church is the only organization that gathers together all sectors of society on a regular basis, for a meaningful purpose. We gather together weekly with leaders from the Medical, Education, the Business Communities, Non-Profits, Entertainment, and Government, to join the movement of the kingdom of heaven in our community in our generation. And it’s never too late to join.

Movements happen when they are embraced by the hearts of people who follow them. This is why it is vital that we gather each week at Mass and in other ways outside of Mass. That’s why we have suggested using our Message Matters with your family, or friends, or co-workers. We are gathering together so that we can impact our community and our world. The point of gathering here is not to relieve our guilt, or to avoid hell, or enjoy a break from the rest of life, or even for the simple benefit of your family. We gather together to change and transform our lives so that increasingly we can change and transform our community and our world, to reflect the kingdom of God. That is the Ecclesia. Lets be that Church.