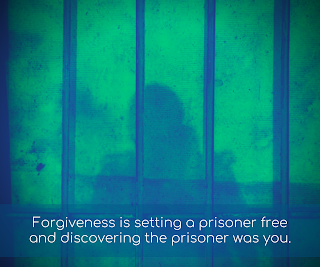 Welcome to our 4th and final week of the Homily series that we’re calling “Baggage.” In the past few weeks we’ve been talking about how the lack of forgiveness for the wrongs that have been done to us or not forgiving ourselves for our past mistakes can cause worry, anxiety and even depression. And that can drag us down like excess baggage and make it impossible for us to live peaceful lives. But even though we know forgiveness is good for us, it can also be really hard for us, because forgiveness involves cancelling a debt that others owe us or that we owe to others for past wrongs.

And frankly forgiveness doesn’t come naturally to us. And just like it wouldn’t be natural for a creditor to call and tell us that we don’t have to make any more payments on our car or house because our debts are cancelled, which although that would be great news for us, it wouldn’t be natural for that to happen. Just like it’s un-natural for us to forgive others or even realize that we need to forgive, because forgiveness and canceling debts takes us beyond our natural fallen human nature and propels us into the supernatural nature of the life of God.

And that’s why the old saying “To err is human, to forgive divine” is so true, because God is the author of all forgiveness in that we owed Him the debt of sin that we could never repay and He cancelled our debt through the sacrifice of His Son Jesus, the Lamb of God who died on the Cross and rose from the dead to make us God’s own children. Therefore we have an inheritance of eternal life.

But on our journey towards heaven in this imperfect world, it’s natural for us as “Hurt people, to hurt people” which is an evil cycle that we can only break free from, if we cooperate with God’s supernatural grace, leave our excess baggage of un-forgiveness behind and be “forgiven people, who forgive people”. And that’s important for us to keep in mind because none of us can go through this life without someone hurting us intentionally or unintentionally and it’s natural for us to want to hurt them back. Just like the Corinthians that St. Paul wrote to in our 2nd reading today when he urged them in the name of the Lord Jesus to stop fighting and hurting one another, because in the early Church there weren’t a lot of worldly benefits to being a Christian. In fact it was downright dangerous as they often had to risk persecution and even death for their faith in Jesus. And you’d think that would have brought them closer together, but instead they had rivalries and infighting going on among them. That is until St. Paul intervened and told them that they needed to start acting like brothers and sisters united in the same mind and purpose so that the Cross of Jesus Christ might not be emptied of its meaning, which is the forgiveness of sins.

If we ever expect to have peace in our hearts, we first have to forgive as we have been forgiven. That’s just the way it works! Because when we refuse to forgive we are choosing to carry around our anger, bitterness and resentment as useless excess baggage and if you’ve traveled by air lately with anything other than a normal carry on bag, you know that even 1 excess bag costs you about 30 dollars and if you’re burdened with extra-large heavy baggage, it can cost you hundreds of dollars, much like our baggage of un-forgiveness can costs us more than we can bear. But if we forgive and cancel the debt of sin owed to us, we are no longer locked into acting naturally in this world but instead we are freed to act supernaturally beyond this world towards heaven through, with and in Christ. Now some may be reluctant to forgive or cancel the debts that are owed to them because they mistakenly think that means they have to also forget what happened or even trust the person who hurt them. But that couldn’t be farther from the truth because when we forgive, it’s only the debt that is cancelled not the wrong.

It doesn’t explain away or excuse anyone’s hurtful behavior because it’s inexcusable. Especially when the people who hurt us aren’t sorry or haven’t asked for forgiveness? But forgiveness isn’t about them asking for it or wanting it. No! It’s about us deciding to cancel it. And it’s not about being fair or letting them off the hook, or pretending that their debt doesn’t really exist, because forgiveness raises us above all that and enables us by supernatural grace to empty our hearts of the baggage that has been keeping us from a life of peace and freedom as God’s Children.

Forgiveness doesn’t mean we have to re-establish a relationship with someone who hurt us either because that would be reconciliation which sometimes can happen after forgiveness takes place, but we can forgive someone without ever seeing or speaking to them again and in some cases that’s the wise and prudent thing to do. We need to keep in mind that when we forgive someone it’s one sided. It doesn’t require the person that we’re forgiving to change at all because cancelling their debt is all about changing us, not them! It’s about what’s good for us, because the people who hurt us don’t deserve to be forgiven, just like we don’t deserve to be forgiven by God. But the truth is that we are forgiven, through the Cross of Jesus Christ and whether we accept it or not, our ability to live in God’s forgiveness depends on our choice and our ability to forgive others.

That’s why Jesus taught us in the Our Father to pray “forgive us our trespasses as we forgive those who trespass against us.” Because we can’t live in God’s peace and freedom if we are still carrying around a bunch of excess baggage in our hearts. That’s why it’s up to us to choose to be free from the pressure and weight of unforgiving attitudes. Because forgiveness is cheaper than resentment, it saves us the cost of hatred, it avoids the expense of anger and it circumvents the waste of bitterness.

So reluctantly, Jeanie went the hospital and stood at a distance as her mother slept. But suddenly she awoke, and cried out “What’s going to happen to me? And Jeanie headed for the door, but stopped when she heard the fear in her mother’s voice saying “I don’t want to die, pray with me” as her mother began to recite the Lord’s Prayer out loud,  Jeanie just stood there in silent rage at the nerve of this woman who had caused her so much pain throughout her life, until almost without thinking Jeanie found herself joining in the prayer at the words: Forgive us our trespasses as we forgive those who trespass against us. And miraculously Jeanie realized that if she was ever going to find peace in her life she would have to forgive her mother as Christ had forgiven her. When her mother reached out, Jeanie held her hand and completely forgave her. And when she did, Jeanie felt as if a huge burden had been lifted from her heart like a prisoner who had been set free. And as she stood there and looked into her mother’s fear filled eyes, Jeanie broke her vow of silence and told her mother that she was not alone and everything was going to be alright. Immediately her mother calmed down, slowly closed her eyes, and a short time later she squeezed Jeanie’s hand slightly and peacefully passed away.

Jeanie had truly forgiven her and was forever grateful that she and her mother were able to find healing and peace in their own ways. Now Jeanie’s process of getting rid of her baggage of un-forgiveness happened unexpectedly by supernatural grace after many wasted years. But we don’t have to wait any longer than today to get rid of our baggage if we choose to follow the 3 step process of forgiveness.

Step 1 is for you to name the person who you need to forgive and how they hurt you. Now of course bringing them to mind or thinking about what they did to you might make you feel angry and that’s perfectly normal and ok, because anger is usually part of the forgiveness process. It means that the hurt they caused you was real. And after you’ve named the perpetrator and what they did, Step 2 is to describe what they took from you when they harmed you. Now this involves adding up and counting the costs of what they did so you will know the exact amount of the debt you are going to forgive. Maybe like Jeanie you are owed greater self-confidence or esteem because someone constantly put you down. Or maybe you are owed the truth from someone who lied to you, or money from someone who stole from you, or trust from someone who cheated on you. Whatever it is, you have to identify what you think you are owed from the person who hurt you. Now this step may take some time in reflection but it’s important that you work through this step thoroughly before you go on the 3rd and final step, which is to actually cancel the debt and forgive the person who hurt you in some real and concrete way. That might mean talking to an empty chair or composing a letter that you won’t ever send, or you can even write the offense down on piece of paper and then bury it or burn it. And to help you get through this final forgiveness step we have these prayers of forgiveness cards in all the pews and also at all the exits for you to take home with you today.

They read: Because I am forgiven and accepted by God because of Jesus’ death on the cross, I can now forgive you, and then you can say that person’s name. It continues with “Your debt to me is canceled. I release you from the debts you owe me. You no longer owe me” (And then name the debts you are canceling). And after you have cancelled the debt, and forgiven the person, you can pray the final prayer on the card which reads:
Heavenly Father, by faith I receive your unconditional love through your son Jesus. I give you my heart and all the hurt I have from what has been taken from me. Heal me and help me to live in the freedom that comes from the power of forgiveness. I pray this through Jesus, my Lord and Savior. Amen!

So don’t wait, take the steps, cancel the debts and get rid of the baggage of un- forgiveness in your heart, so that the words of the prophet Isaiah from our 1st reading can ring true for you, when the yoke that burdened you, the pole on your shoulder and the rod of your taskmaster is smashed as on the day of Midian. Because forgiveness is about setting a prisoner free, and finding, that the prisoner, was you!