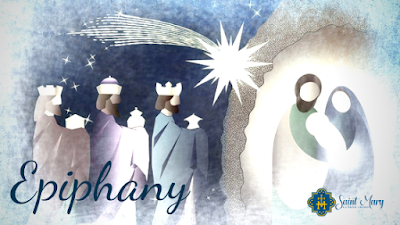 On this Feast of the Epiphany, as we begin this new year, we are beginning a new homily series which we call baggage. The Feast of the Epiphany commemorates the gifts of the magi, who came from distant lands to worship the child Jesus, suggesting that his coming is a revelation for all people everywhere. Most famously, they came bearing gifts.

Just as the magi offered gifts to the Son of God, God brings you a special gift today. God is offering you the gift of removing your baggage so that you are free to live the life God has in store for you this year and not be weighed down by the baggage of the past.

But, it may be difficult for us to make a fresh start if we haven’t dealt in a healthy way with the negative things of the past. Because if we’re already exhausted from lugging around a lot of baggage from the past, it becomes difficult, if not impossible, to make this new year better.

Some people can’t get over the past, past hurts and hang-ups, past missteps and mistakes. Maybe, for example, you have an adult child, or a sibling, or a good friend that fits this description. You know, they harbor a grudge or hold onto a hurt and just won’t let it go, which keeps them from moving forward from where they really should be, where they want to be, where God wants them to be. What we’re talking about basically is forgiveness.

What is forgiveness? Forgiveness simply means to cancel a debt.

In finances, if the bank, which holds your mortgage or car loan, called you and told you they forgave the loan, it would mean your debt was wiped out. You legitimately owed the bank money, but they were canceling it. Of course this would mean they were out the money, they would eat the cost.

When it comes to forgiveness, when it comes to canceling a debt, it actually does mean that somebody has to pay, someone has to lose out on something they are owed.

And this is what makes a simple concept like forgiveness much more complicated and much more difficult to accomplish. Everyone thinks forgiveness is a great idea… for everybody else.

Everyone is all for forgiveness until they actually have something to forgive, until they have a debt to cancel.

To forgive a debt is to acknowledge that we will not get something that we are owed, something legitimately owed to us, something we had a right to.

If you were not owed something, then forgiveness isn’t needed, but something else is needed like understanding or more perhaps realistic expectations on your part. We need to be careful about a sense of entitlement and thinking we are owed something when we are not.

Maybe you know you are owed money from a business partner who took more than their fair share. Or maybe you did all the work and they used you and rode on your coat tails.

You may be owed a debt of having a happy and secure childhood. One or both of your parents failed to provide that for you. Your father was an alcoholic or a workaholic and rather than being around for you, he was absent. Or maybe that describes your mother, or maybe she was so critical that you wish she hadn’t been around because she was so negative.

Maybe you have grown kids and they owe it to you to be around or bring the grandchildren, but instead of being grateful, they never call or talk to you, they spend more time with their in-laws, you feel neglected.

Maybe you need to forgive a friend for dishonesty, for deceit. You thought you could trust them, but they let you down, they stabbed you in the back. Many people, at any age, have problems with their siblings. In life, sometimes people don’t give us what we are owed. People disappoint us and let us down and it creates a debt/debtor relationship. Forgiveness is canceling the debt.

When it comes to forgiveness, we are at one of three stages.

There is the denial that makes excuses. Some people don’t cancel the debt because they simply excuse bad behavior. They say the harm done didn’t really matter (when it actually did) or it was no big deal (when it actually was). They explain it away with explanations that don’t wash. They make allowances that shouldn’t be made. Eventually this becomes unsustainable and ends badly, such as in a melt down or a blow up due to repressed feelings.

Then there is another kind of denial in refusing to forgive. People deny that forgiveness is helpful or appropriate. They believe some things are unforgivable. For them forgiveness is like condoning bad behavior, letting the guilty off the hook, essentially saying what they did was OK, when it was not OK.

The refusal to forgive leads to bitterness. Which hurts the heart. But worse than that, your bitterness doesn’t stay contained. You can’t control it and keep it directed towards only the person who hurt you. It leaks into all of your relationships, eroding the trust with people who have not betrayed you or hurt you.

And if that bitterness turns your thoughts to revenge or payback, you’re placing yourself in a perilous situation in which your bitterness could rule your life and quite possibly lead to even greater loss for you.

If you’re in denial about the necessity of forgiveness we are going to try and challenge you out of it and help you look at it more honestly.

The second stage of forgiveness is acknowledging that forgiveness would be helpful, but you have not done it yet or don’t know how.

Maybe you have reached out trying to forgive, but your effort was rebuffed, or it didn’t come off right. Or you thought time would naturally bring about forgiveness, but you discovered time doesn’t heal all wounds.

Which is why there is a third stage to all of this. The third stage is to actually go ahead and do it. Forgive someone, and release the debt. In the same way the bank sends you the note if you pay off your car or pay off your mortgage, once the debt has been paid, you have canceled the debt, so it is no longer in your head and on your heart. And, when you forgive often enough, you can become quite good at it. Forgiveness can become a habit, a heart healthy habit.

We are going to talk more about how you develop that habit in the weeks to come.

Name the person you have to forgive just to yourself, the name that came immediately to mind through this message, the person you’re already thinking of right now. Then evaluate where you are. Have you been denying the necessity of forgiveness by making excuses or simply refusing to forgive? Do you acknowledge the need but don’t know how to do it?

My hope for this series is that you would honestly come to recognize your need to forgive, identify more effective skills to actually make it happen, and develop those skills into habits.

Yes, today is the Feast of the Epiphany, which commemorates the gifts of the magi. God wants to bring you the gift this new year of removing your baggage so that you are free to live the life he has in store for you and not be weighed down by your past. Can you accept God’s gift?  Forgiveness requires a decision to be open to God’s power because forgiveness isn’t natural, it is supernatural.