Ascension of the Lord 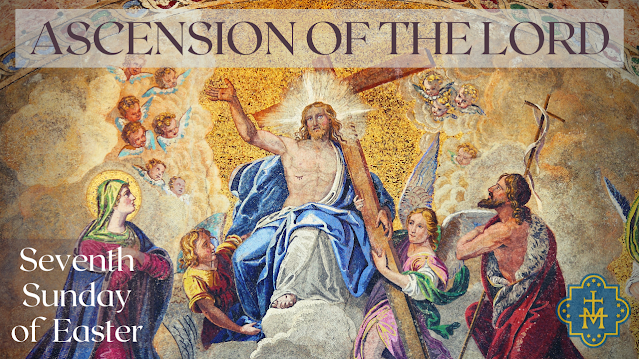 Today we’re wrapping up our Easter series Love Lives. With that in mind, here is something to ponder. The love of God is missional. You are probably wondering what that means.

It means God loves us for who we are. But God also wants us to share in his love by going out and joining in his mission, which is to share his love and tell others of his love for them. That’s why we’ve been saying “Love Lives” – God wants his love to continue to live in us by sharing his love.

Today we celebrate the Ascension of the Lord when Jesus ascends up into heaven. And we read about that missional love of God as he sends his disciples out into the world to share his love, the message of his love. And with the Ascension, with this sending that we read about, something entirely new is introduced. Let’s not take this new thing for granted.

You know how we take certain things for granted today that we’re familiar with, but it’s hard to appreciate when they were new, when they were first introduced.

We take automobiles for granted today, and it’s hard to imagine the time when we did not have cars. Before the transcontinental railroad was completed, in 1869, it took five weeks to cross the United States, if you survived it. With the railroad, crossing the USA was reduced to one week. Now with flight, it’s four to five hours. How about this? Do you remember when bottled water first was introduced? People were saying, why would you buy water? Now, we’re buying regular water, sparkling water, flavored water, spiked seltzer water. We buy all sorts of water. Bottled water and improvements to transportation changed our world, and we take them for granted today.

The instruction with which Jesus sends out his disciples, required a new way of thinking and behaving – it was the introduction of something that would change their worlds, it would challenge their assumptions and expectations in a big way.

For the last few weeks in this series, Love Lives, we spoke about Jesus’ profound love, and that he was killed for being so loving. Sometimes love can really hurt. But three days later Jesus rose from the grave. He appeared to individuals, small groups and great crowds.

Today we heard about one of these appearances. He appears to his apostles and tells them not to leave Jerusalem, but to wait.

Sometimes we oversimplify and misrepresent God’s ability to speak to us. We tend to think that the only instruction God gives in our lives is GO. He told Abraham to GO. He told Moses to GO. If God is speaking he’s telling us to GO. But God can say more than a few words. God can instruct us in a number of ways, and here his instruction is to stay and wait. So if you’re trying to discern God’s will for your life, I just want you to know that God doesn’t ever only tell people to GO. Your instruction might be to stay, or wait, or something else entirely.

Jesus tells his apostles to stay and wait for the Holy Spirit to come. Then they ask Jesus a very interesting question. “Lord, are you at this time going to restore the kingdom to Israel?” A key word here is Kingdom.

The mission he is sending them out on is the mission to help build the Kingdom of God. Jesus specifically used the word “kingdom” many times throughout his ministry. However, they don’t entirely understand what he means.

The word kingdom was confusing to them and it can be confusing to us. We think of a kingdom, and we think of kings and queens, a physical territory, potentially with walls and boundaries and stuff.

But that’s not what Jesus meant when he used the word “kingdom,” It is not a physical kingdom but a spiritual kingdom. God’s Kingdom is anywhere God rules and reigns. Namely, in our hearts, over our lives.

God wants to bring his Kingdom into your life. He wants to be the King of your heart. However, the apostles were still expecting a physical kingdom because they asked, “Are you going to restore the kingdom at this time?”

The land was ruled by the Romans. The apostles are looking for some magic trick. They are asking Jesus if he is going to introduce some sweeping change and overthrow the Roman oppressive rule. They thought Jesus would do this suddenly, and they thought God’s mission only included Israel. After all, for hundreds and hundreds of years Israel had been God’s chosen people. The way God operated was that the Jews were to follow him, and because they did, they were to succeed and thrive, and everyone else, well, not so much.

This is how the apostles are thinking. Jesus tells them, “It is not for you to know the times or seasons that the Father has established.” But you will receive power when the Holy Spirit comes upon you, and you will be my witnesses in Jerusalem, throughout Judea and Samaria, and to the ends of the earth.”

He flips their expectations with his reply. For the Kingdom is spiritual not physical. And who is going to do it? You are! And most of all. Don’t miss this. Jesus says I’m going to spell this one out to you. Who is it going to include? Everyone!

Yes, everyone, starting in your own city extending and going to the ends of the earth.

This is so hard for us to appreciate how challenging this would have been to hear. But Jesus tells them how his kingdom is going to be.

So, what does that mean for us here today? Church is not about a building, it’s about people. Church is a growing movement of God’s love in God’s people, you and me. Don’t take the movement for granted like we take transportation and bottled water for granted. The movement is live and real. We are Church, the Body of Christ, a movement. Church, you and I, are for the world, not just for other church people. Who is sent out? You are!

So Church, we have to remember how this all started, what we are a part of. The kingdom of God is supposed to be a growing spiritual movement of God’s love because love lives.

This is what we want you to know.

Jesus has risen and he lives! And now his love is supposed to live on in us. You church, are a spiritual movement. You are a growing spiritual movement of God’s love that exists for the entire world. God’s love is missional because we are sent on a mission by Jesus for love to share God’s love and let people know they are loved by God. God the Father sent his son, and the Son, Jesus, sends you.

This is what we want you to do.

I encourage you, and I challenge you. Join the movement. Don’t just go to church. Come on. . . Be church.