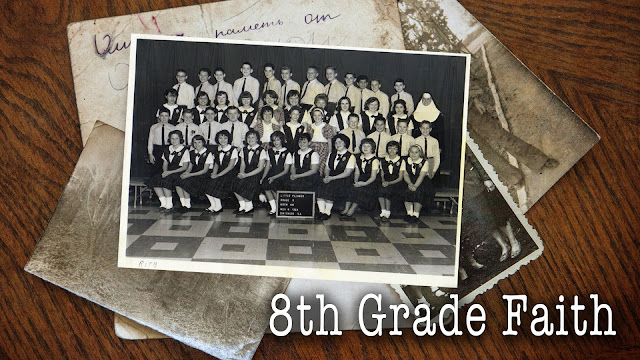 Today we’re starting a brand new homily series that we’re calling “8th Grade Faith.”  To help you connect better than ever with our series we are starting a daily devotional which is based on the homily you hear every Sunday. You can sign up for this daily devotional which is called Prayer Fully.  We’ll be happy to email it to you every single morning absolutely free of charge. It can direct your daily prayer and reflection in ways that are easy to handle and it’s Biblically based. Just go to our website and sign up there.  Sign up information is also in the bulletin and there is a direct link in this weekend’s newsletter.

So what about 8th grade faith? For some of us, growing up Catholic meant going to Catholic school. But if we didn’t go to Catholic school, we probably ended up in something called CCD. I still hear people refer to CCD. Do you remember what CCD stood for? Confraternity of Christian Doctrine.

What we do today is no longer called CCD. We have children’s ministry processes like explorers, adventure days, Children’s liturgy of the word, catechesis of the Good Shepherd, and sacramental preparation. Broadly speaking, you could call all of these processes children’s religious education or faith formation, but please don’t call them CCD.  We dispensed with that title, a long time ago.

Unfortunately the driving motivation for many parents, then, and now, is getting their kids first confession, first communion and confirmation.  After that, most parents feel like they can relax because they’ve done their job. Meanwhile, the sum total of our religious education experience, if it was anything like my religious education experience, was pretty much boring and poorly done.  Then, once we were confirmed, we looked around at others who were confirmed in the Catholic Church, and we weren’t too interested. What we saw wasn’t all that inspiring, or impressive.

Anyway, for many people, effectively, confirmation was graduation.  Graduation from church! It’s not that they gave up on God or are bad people, but what so many of us are left with, is whatever we think we learned in confirmation class somewhere around eighth grade or so.

Having an eighth-grade faith is not a bad thing. In fact, it’s a good thing, it’s a great thing, if you’re in eighth-grade. But an eighth-grade faith is a distinct disadvantage if you’re an adult.  It’s a handicap for the challenges of adult living. You’re not the person you were in eighth grade anymore. You’re more seasoned and experienced, you’re more mature in every other aspect of your life. Can you imagine actually doing the job that you do, or managing your finances, or parenting your children based on your eighth grade understanding of those things?  Well, it’s exactly the same for your faith.

In this series, that’s what we’re talking about. We’re going to dig deeply into this reality.  We promise to do so without any sense of judgment or guilt. This series is about moving on, moving on to a more useful approach to our faith.

For purposes of full disclosure, I want to acknowledge that there was a period of my own, after high school, when I stopped going to church. Obviously, I’ve turned that around, but I do know what I’m talking about when it comes to this experience.

I really do understand why people give up on church and why we can’t let a poor experience of church get in the way of our faith.

Think about it. People who were nothing like Jesus liked him.  And he liked them. He didn’t wait for them to clean up their act before he welcomed them or accepted them, he just wanted to be with them.  He wasn’t interested in preaching to perfect people, he went looking for the imperfect, the flawed, the un-churched. The Pharisees saw this as a moral compromise.   And, Jesus knew it. He heard their mumbling. He knew what they were saying behind his back. But He didn’t confront them directly. Instead, he tells the Pharisees and the sinners a story, the story of The Prodigal Son.

Here is a synopsis and explanation of what we just heard.  A man had two sons and the younger son demands his part of his inheritance, essentially saying to his father, you are dead to me.  I am going to treat you as if you’ve already died. Give me my inheritance. I want all that’s coming to me. And the father agrees. The son departs, squanders everything in a dissolute and entirely foolish way, and then hits a patch of bad luck that leaves him homeless and penniless, at which point, he decides to return to the father.  To his credit, he is contrite. He approaches his father in humility. He doesn’t expect to return to the family. He just seeks employment to avoid total destitution. But the father actually welcomes him, with open arms, and even proceeds to throw a party.

The stories that Jesus tells in the Gospels are called parables. Everybody in the story represents somebody in reality.  The younger son represents those sinners in Jesus’ audience, and Jesus wants them to know that it’s okay, that God loves them anyway.  They don’t have to clean up their act before they can come back to their Father, their Father simply wants them home. However, they’re not the only intended audience for this story.  It also addresses the Pharisees. And they’re represented in this story by the older brother, who we meet next.

The older brother had been out in the field.  So the older brother is doing what he always did. He was working for his father.  He was the dutiful son. He was the rule keeper. As he comes in from work, he asked, “What’s going on?  Why the party?” A servant tells him that his brother has returned, and his father is hosting a celebration.

He becomes angry and refuses to go to the party.  He’s angry because he has obeyed his father and followed the rules and now, he’s looking for HIS payoff.  He’s earned his father’s gifts and grace, as far as he’s concerned, his father OWES him. We might think that makes sense.  But when you peel back the older son’s intentions, it’s easy to see that they’re no different than the younger son’s intentions.  He obeys his father not out of love and respect, but out of what’s in it for him, access to the father’s money and possessions. The father, who represents God the Father in the story, answers his son not with condemnation but with patience and kindness.  He says, “My son, you are here with me always. Everything I have is yours. But now, we must celebrate and rejoice because your brother was dead, and is come back to life. He was lost and now he’s found. He was lost and now he’s found. Wow. Beautiful.

This parable isn’t just about the prodigal son, it’s about both sons, and God the father.  Both sons are lost in different ways. The brothers in this story each represent a different way of getting it wrong when it comes to God.  The younger brother represents the people who act like God is not there, living life as they choose for themselves, apart from God, and his laws, and his love. Sure, they’ll accept good things when they come their way, but it’s a one-sided arrangement.  Maybe, that’s your story.
Maybe, back in confirmation class, you learned a lot of religious rules, rules you didn’t necessarily agree with or maybe didn’t even understand, but either way, you walked away from it all.

Or, maybe you’re like that older brother, you’re the dutiful son, the religious rule keeper, and you’re going to earn your salvation, you’re going to work your way into heaven, God owes it to you.

Growing up, we learn a lot about right and wrong, do’s and don’ts. And that’s how it should be. God is good.  His law is good for us. It reflects His goodness and grace. It reflects His mercy and justice. Without rules, kids don’t learn to love. They descend into selfishness and bad behavior.  Without limits and laws, kids become confirmed in their infantile assumption that the world revolves around them. However, if we never get beyond our eighth-grade faith, we reduce Christianity to rules;  rules that we accept or rules that we reject, but rules nonetheless. God wants more. God wants a lot more.