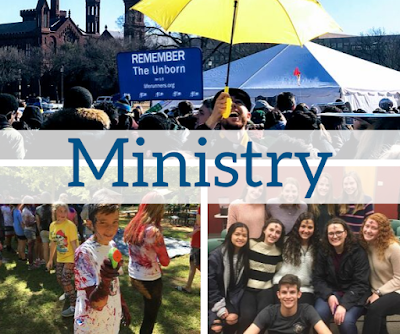 Welcome to the third week of a series we’re calling “8th Grade Faith”. We started a couple of weeks ago saying that for many parents just getting their kids through first communion and confirmation  made them feel that they’ve done their job. Maybe you were told that once you were confirmed, you were an adult in the Catholic Church. Confirmation effectively became graduation, maybe graduation from church, from religion, from religious education, from faith formation, all of it. It’s not as if you gave up on God because you definitely didn’t, you’re here, but you may have given up on a lot of opportunities that usually goes with an adult relationship with God. What you’re left with, what you’re left holding then as an adult is an 8th-grade faith.

As we said last week, an 8th-grade faith isn’t a bad thing. It’s a great thing if you’re actually in 8th grade. But for those of us who are no longer in eighth-grade, it’s a handicap for the challenges of adult living. You’re not the same person that you were at confirmation. You’re more seasoned, you’re more experienced, you’re more mature in every single other aspect of your life and you know that all of life is a risk. And taking risks is how we develop mature relationships. [Most of us have run into friends from eighth-grade later in life only to realize we had never developed a mature relationship with them. Can you imagine living your adult life based on what you knew in eighth-grade and your understanding of those things? Well, it’s the same for your faith.] When you were growing up, maybe you viewed church as an extracurricular activity, an add on, or an academic exercise or something that you did on Sunday morning. Maybe you did it because YOUR parents TOLD YOU TO.
Well, the Church that Christ founded in its earliest of days, had a very different approach to faith. St. Paul was one of the first leaders of the church together with Peter, and Timothy whom Paul mentored in the faith and whom Paul treated like a son. Paul considered himself Timothy’s father in faith. This letter to Timothy we read today was written to inspire and encourage Timothy as a leader and help him with some of the challenges he was facing. But the letter wasn’t meant exclusively for Timothy. It would have been read publicly in the church at Ephesus just as we read it this morning.

Paul reminds Timothy that some people fall away from the faith. They leave to pursue material goods and worldly ways. So he warns him, “But you, man of God, pursue righteousness, devotion, faith, love, patience, and gentleness”, It’s as if Paul is grabbing Timothy by the shoulders, looking him straight in the eye and giving him this urgent challenge, a challenge not to pursue the things of this world, but to pursue higher values and greater goods. [Things like devotion and patience and gentleness.] He goes on,”Compete well for the faith”.

So Paul describes faith here and elsewhere in his writings as an athletic contest. This was a favorite analogy of his. Sports in Greek and Roman culture were huge, just as they are today. Some historians think that Paul may actually have traveled to, attended and preached at the ancient Olympic Games. He knew that people loved to watch and participate in sports and so he used that for his purposes of evangelization. Paul uses that interest as an analogy for faith. He says, “Compete well for the faith”. Olympic athletes don’t look at their sport as an obligation to be fulfilled or a class to be completed or a Sunday morning task. If an athlete has that attitude,they’ll never get to the Olympics. For Olympians, competition is a lifestyle. It’s who they are. And they make choices that support that lifestyle. They eat the right food, they make exercise a part of their daily routine. They rest appropriately. They discipline their bodies to push themselves to their full potential. They compete. I’m sure that many of you can relate to this because sports are a part of your life or your kids’ lives. And you bring discipline and commitment and intensity and focus to sports. But have you ever considered bringing that same discipline to your faith? Imagine if we were as intense in our commitment to God; and in our focus on prayer and study of the Bible; if daily we were practicing and trying our best to get better and to come closer to Jesus.

That’s what Paul is urging Timothy to do, to compete. You don’t just become a better Christian, just like anything else in life. You don’t become more loving or more patient or more faithful by accident.You don’t grow into it. It doesn’t happen by merely showing up at church on Sunday morning. It’s been said that you have as much chance of becoming a  Christian by sitting in the pew as you do of becoming a football player by sitting in the stands at a football game. You have to compete. You have to be in the game. Finally, Paul encourages Timothy in a third way. He explains why it’s worth it for us to really pursue our faith and to compete for it. In the same way Olympians go for the gold he says,”Lay hold of eternal life, to which you were called”.

We hear that phrase, eternal life and we think of heavenly life. We think of living forever but that’s not only what Paul is talking about here. By eternal life, he means God’s life in us. He means a rich and full life, the life that God intends for us to live. In this world, we’re tempted to try and find life in things that are not life, not true life. Things that do not truly satisfy our hearts or enrich our souls. They look like life. They’re sold to us as life, but they aren’t life. We expect power, pleasure, possessions, prestige, and sports to fill our hearts and enrich our soul. But we know from our experience that none of them do. At least not in a long term sustained way. They promise life, but they can’t deliver it.

[We already know that’s true. And why is it true?  It’s because they’re smaller than you. Your heart will never be completely satisfied with something that’s smaller than you. Power, pleasure, possessions, prestige, sports are all smaller than you.] By now you all know that I am a big Alabama Crimson Tide fan. I love college football. It permeated my childhood and adolescence. It’s been a major part of my adult life as well. Just about 10 or 11 years ago, though, Alabama’s football team didn’t look so good. I remember Alabama losing to teams that I didn’t think they should lose to. All I wanted was for them to win one more championship. Just one more in my lifetime. And now they’ve won 5. You’d think there would be some fulfillment from that, but with each championship, about two days after the game, I felt this emptiness inside. It was like eating a really good meal, then a couple hours later the feeling went away and I was left with complacency. I looked for happiness there and I found it, briefly; but it didn’t last.

There’s nothing inherently wrong with power, prestige, riches, possessions, or even sports. They’re perfectly fine on their own. They just aren’t life in the sense of true life, the life that God intends for us to live. Only what’s bigger will satisfy you. So Paul counsels Timothy bluntly, “Lay hold of it.” Look at the words he relies upon, pursue, compete, lay hold. Paul’s telling us that if we want the life that God wants for us, that fills our hearts and enriches our souls, we’ve got to pursue it, we’ve got to compete for it, we’ve got to lay hold of it. He’s encouraging us to be aggressive in growing our faith. A lifestyle choice that’s far removed from that 8th-grade faith. But here’s the problem. Only God and His grace can satisfy us, but many things in our day to day experience conspires against that goal and urges us to pursue other goals, ANY OTHER goals. In fact, we need help, we need support and encouragement, and we need a plan to do it. We need to think about things like prayer, self study and group study, and serving others. Here in the parish we have many opportunities for growth in our faith life, our relationship with God. Our liturgical ministries, our service ministries, our youth and children’s ministries, our adult outreach to the poor.

Last week we talked about stewardship and what that means regarding material wealth, your treasure. But today we’d ask you to look at the other two “t’s”, your time and your talent. If you are a regular here at Saint Mary’s you’ve heard us encourage you recently to step up to help with our children’s ministries, but there are lots of other ways to serve. All of these provide not only the chance to grow in your faith but also to reach beyond yourself, as Jesus did, to help others and to serve the parish community. You’ll find a deeper appreciation of the gift of your faith and you will grow in prayer and discernment of God’s will by placing service to others before yourself.

God wants you to aggressively pursue faith, to compete for it, to lay hold of it. That’s the kind of life that he wants for you to have, to live the kind of full life that he has in mind for you. So if you want the life that God wants for you, that fills your hearts and enriches your soul, you’ve got to pursue it, you’ve got to compete for it, you’ve got to lay hold of it. Maybe you don’t think you have much to offer but I promise that God has given you the time and the talent, make use of it. If you’re not in 8 th grade, an 8 thgrade faith won’t do.