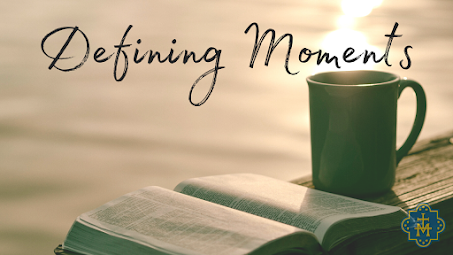 This is the third week of our series Defining Moments.

Defining Moments are brief experiences, so brimming with meaning that they bring definition and clarity into our lives.

Today we are looking at a Defining Moment of a hero from the Bible and how it applies to us.

We are looking at a defining moment early in the life of the prophet Samuel. And the moment he experienced is one I believe God wants to give to each and every one of us.

Samuel lived 1100 years before Christ. At the time of Samuel’s birth, Israel had moved into the Promised Land after 40 years of wandering in the desert.

But their troubles weren’t over.

This period is called the period of the Judges. Israel was a loose confederation of tribes, held together by leaders called Judges.

Samuel lived in a period of crisis and transition.

There was a leadership crisis that was felt throughout the nation. Eventually, Samuel transitioned the nation from a tribal culture to a united kingdom under the leadership of Israel’s greatest leader of all, King David.

The passage we are looking at today is the defining moment that launched Samuel into his great and historic role. A moment long before he knew fame and influence.

A seemingly insignificant moment, when he was a nobody and nobody else paid any attention to him.

Samuel grew up working for the priest Eli who was the high priest at the time. While he was not a bad man, he was weak and lazy.

His poor leadership began with his own family, his sons abused their power. They were an embarrassment to him; they did a lot of very bad things, and yet Eli couldn’t lead them out of trouble much less the nation.

Again, Scripture subtly tells us of Eli’s poor leadership, His eyes had lately grown so weak that he could not see. There was no vision for the nation because Eli was so weak and he could not see where God was leading the nation or what God wanted to do.

So Samuel is asleep in the Temple of the Lord. This “Temple” would have been more of a tent than the permanent structure that was later built in Jerusalem by King Solomon. The tent housed the Arc of the Covenant, which contained the Ten Commandments.

It was the most sacred place in all of Israel, the “holy of holies.”

Samuel was sleeping there when God called out to him.

But Samuel believes it is Eli who called him. He runs to Eli, who tells him he’s mistaken.

Same thing happens 3 times. Samuel still thinks that Eli is calling. But after a third time, it is Eli who finally gets what’s going on. At which point he gives Samuel a piece of spiritual advice that forever changes his life.

If you put this piece of advice into action in your life, it could be a defining moment in your relationship with God and bring more purpose and significance to your life.

Just by putting this principle into practice many of the aspects of your life might come into focus and start making more sense. You might have a much clearer sense of direction. I would go so far to say that you might understand the meaning of your life and your place in this world in a way you could not on your own.

That’s what happened to Samuel.

But, before I tell you what Eli said to Samuel, let me warn you: this advice is incredibly, ridiculously simple. It is sooo simple that you might be tempted to dismiss it. But don’t.

This is one of the basic challenges of the Christian life. We often fail to see it and experience God because it is so simple.

That’s what happened to Eli and Samuel; over and over again they failed to see what was going on.

Most spiritual practices are ordinary and simple, but powerful because they access the power of God and this one is no exception.

So here is the groundbreaking advice Eli gives to Samuel, that changes his life. Eli tells Samuel “go back to bed, wait for the Lord to call you and when he does, say,

Speak, Lord, for your servant is listening.”

When you have the impression or feeling that God is trying to get your attention and speaking to you. Respond to God and say,

Speak, Lord, for your servant is listening.

Pretty simple advice, and the moment he starts using it, it changes everything.

Speak, Lord, for your servant is listening.

Scripture tells us that God then reveals to Samuel that there is going to be a change of leadership in Israel, Eli will be out and Samuel will be in. God reveals to Samuel his vision and plan for his life, what he plans on doing through him.

From this point forward, God was with him and not one of Samuel’s words went unfulfilled.

Samuel learned to tune into God so well that when he spoke, he was always effective. Because he was effectively listening to the Lord he was speaking more effectively to everyone else.

The Christian life can contain moments of incredible impact and significance, power and grace. But it doesn’t begin there. Bold deeds and historic achievements are instead the fruit of simple obedience and the humility to listen.

It is as simple as listening to the voice of God and to hear him speak we have to listen. We can do this in several ways.

One, by establishing a daily quiet time, even if only 5 or 6 minutes a day. By making it the same time and place everyday and so that you’re more likely to stick with it. We listen by seeking zones of silence in our days, apart from technology and noise and clutter of our culture.

God uses choirs of angels and stars rising in the East, sometimes for sure. But more often he uses quiet moments and silence to communicate.

Two, by thinking about the ways God has already spoken to us in our life. A couple of weeks ago we asked you to think of 3 to 5 defining moments in your life. These moments are times when God was moving in your life and speaking to you.

Three, by sharing those moments with others, and by actively listening to the way God is working in the lives of those around you.

This is the reason why we continue to encourage the 3 Conversations here on our campus, in your homes, at the places you work, or practically anywhere, because it is through listening and sharing that you realize how God has and is speaking to you.

Your relationship with God will change the moment that you recognize that God wants to communicate with you, that he has basic and practical advice he can share with you on a daily basis, to help you, to lead you and to guide you.

Until you have that moment, your relationship with God will be stunted. God will be a category, a class, an obligation, an idea, but nothing more…

It is interesting isn’t it, Samuel had grown up in Church. He had lived at the Temple from an early age, at the place where God was most present, and yet, until he deliberately and intentionally listened to the Lord, he couldn’t recognize the voice of God.

Some people are like that in church. They attend church their whole life long but they’ve never heard the Lord speak to them or they don’t recognize his voice when he does speak.

Samuel’s life changed and he began an incredibly significant and successful life; a life of historic impact, when he said,

Speak Lord, your servant is listening.

It’s that simple. God wants to speak to you, but you have to believe that so much, that you are willing to invest time in it.

So this is what we want you to do.

Begin to set apart a place and a time where you can spend 5-6 minutes alone with God. Whether you are just silent, or reading Scripture, or in front of the Blessed Sacrament… And when you are there, begin your time with God by saying:

Speak Lord your servant is listening.

Pray it every day. It could be your defining moment.